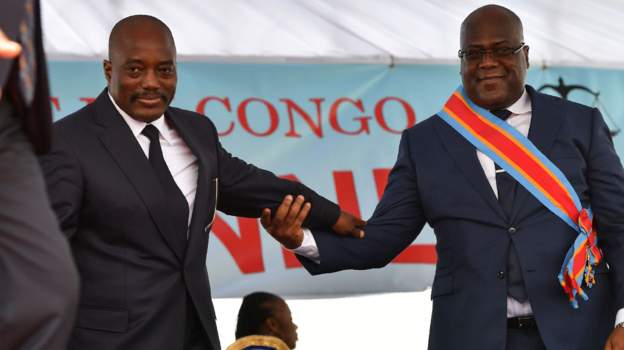 The Democratic Republic of Congo’s President Félix Tshisekedi held a rare meeting with his predecessor Joseph Kabila amid tension in their coalition.

The two leaders discussed “the progress of the coalition”, the Common Front for Congo (FCC) coalition wrote on Twitter.

Despite winning the presidency, Mr Tshisekedi has had to come to an accommodation of Mr Kabila’s party, which controls the majority of seats in parliament.

Negotiations between the two parties took seven months before a consensus was found so that a government could be formed.

Relations between the two parties have been tense with rival politicians exchanging verbal abuse and in some cases using physical violence.

The meeting between Mr Tshisekedi and Mr Kabila did little to calm the tension that has been rising for months and “points of contention” remain, the two camps told AFP news agency on Monday.