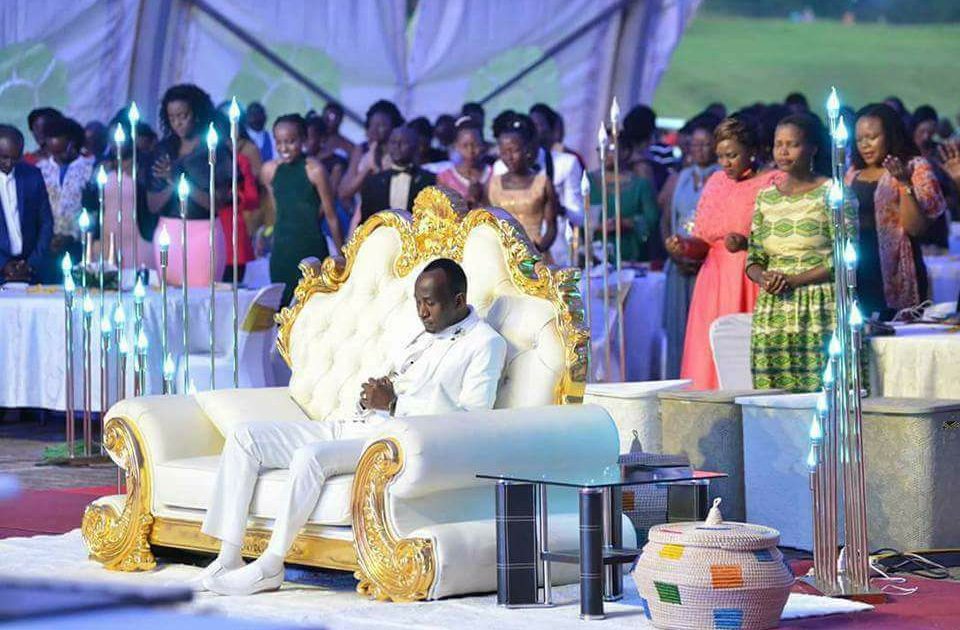 Prophet Elvis Mbonye is soft spoken; you would be surprised that this man has drawn a crowd of Kampala’s crème de la creme to a session with him every Tuesday night since 2014. While presiding over his Zoe Fellowship, Mbonye is unreachable, with a coterie of security guards. However, at the Serena poolside, he is affable, though seemingly hurried.

This article was published in the Daily Monitor, January 2017 about Prophet Mbonye’s ministry.

“Not anyone can call themselves a prophet,” he says to my question about why he calls himself such, adding, “There have to be signs that validate that calling. In 1998, I was called by God in a supernatural encounter witnessed by my sisters. I got saved and I immediately spoke in tongues. I had a vision of God calling me to be a prophet.”
The next day, the Makerere University student of Development Studies had supernatural knowledge about friends and family, however, it would be two years before God appeared to him again. “I attended Victory City Church, Kitintale where the pastor and elders noticed my gift and put me in leadership. After campus, I had a job offer but after fasting and praying for three days, the Lord showed me my destiny as a prophet.”
From then on, it was a lonely life of praying on hills and deserted houses, and having a supernatural meal every day. His first international prophecy was the 2004 Tsunami. Many argue that in these times of economic strife, Mbonye’s prophecies are immaterial. However, he counters it saying, “If you are negative, forget about the good that comes from anything. Some of these prophecies are signs that it is the Spirit talking. If you believe, you will benefit from the entire spiritual package the prophet brings. Once you believe, supernatural forces take charge of your life – what some people call luck or fortune. The Bible tells you to believe your God and you shall be established; believe His prophets and you shall prosper.”

The uncertain world of prophecies
For 2017, most of his prophecies are dire, but he is quick to say God never intends evil to happen, so he always prays against bad prophecies. “Some change and the effects are not so adverse. However, it is a mystery to me why even after praying against them, many of those prophecies actually happen.”
Indeed, he agrees there are times when he misinterprets the messages. “Prophecies come on different levels and there are some which did not play out the way I said they would. The truth is that the spirit of the prophet is subject to the prophet. I may be in favour of an event happening, so I subject the spirit of prophecy to my desires.”
On whether these misinterpreted prophecies give him a bad image, Mbonye says, “There is nothing that paints a bad picture of me because, I do not care about man’s opinion. I have seen God and I will be answerable to Him. I do not get into people’s faces; they come to me.”
The most sought after time is the Point of Contact session where people bring passports, CVs, court documents, and medical forms, so that Mbonye can lay his hands on them. “I’m not a pastor that I should frequently be with the sheep. As a prophet I decree the final thing.”

Prosperity pastors preach and live the prosperity gospel, but Mbonye takes it to another level. Every week, Zoe Fellowship spends Shs54m on the venue, tents, stage, and lighting. He drives a BMW X6 and his dress style is expensive; his gold ring looks worth five months rent of a house in good neighbourhood.
“This past week, the Lord showed me hell again and the people who went there,” the Arsenal fan says, adding, “Hell is stuffy, poor, sickly, and degrading. I have been to heaven and it is a glamorous place with streets of gold. All attributes about God are glamour and beauty and I’m of God, so I will unapologetically be always on the side of what is rich. I have heard shallow debates where politicians defend themselves for being in air-conditioned cars. You want me to be in a car where I sweat? (He laughs).”
Mbonye mocks the culture that demonises wealth and exalts everything broke. Four months ago, he was criticised for a pledge card his team released which had Shs200,000 as the lowest amount one could pledge. “I do not design my pledge cards,” he says unabashedly, “Most of the time I do not know what my staff is doing. I only show up to minister, but I’m in agreement with what they do. I do not answer to people who talk about me yet they know nothing about me.”
He adds that there are over 7,000 people in Zoe Fellowship, so the criticism of a few will be swallowed up. “It is like the president being concerned that a bodaboda man is complaining about how the government is run.”
I remind him that considering the minority is the gist of democracy, but he says, “The Scripture does not favour democracy. Those who are close to me know I always check things to find out if they fit the pattern we received from heaven. I know this will not go down well with this politically correct society, but I only relate to hearing the Spirit.”

Deciphering the political scene
The prophet says he predicted the 2012 UPDF chopper crash and reached out to UPDF officials, who ignored him. “From that time, government officials attend the fellowships and many approach me for guidance.”
He is hesitant to talk about the political future. When I press him, he says, “I would not want to propagate anxiety, although … what I can say is that what is coming is setting the stage for what no will of man can stop. Man can only fight so much. Let me stop there.”

Challenges of being a prophet
The man who once bordered on atheism would have preferred a freer life, but he cannot sit in one place without being accosted by people. “The best part of being a prophet, though, is the experiences I get every night, to the level of accessing the very Throne of God once in a while. I cannot trade that for anything.”
Mbonye does not credit any Ugandan pastor with mentoring him, saying he was mentored through the books of Kenneth Hagin and he only respects Rick Joyner and the late Kim Clement.”
The 40-year-old prophet, who loves comedies and detective thrillers, is expecting his first child. When I ask if it is right for him to watch secular movies, he tells me God is not limited to the opinions of men. “That traditional mentality has really messed up the Church.”

Attending Zoe fellowship
By 4pm, the 5,000-seater tent is filled a quarter way as adherents and the curious trickle into Kololo Independence Grounds for the much-billed 2017 prophecies to be unveiled. On each white plastic chair are two envelopes. A courteous usher in a blue skirt, checkered top and high heels, tells me the plain white envelope is for the normal offertory. “You cannot enter the House of God empty-handed. The second envelope is for the prophetic offering. After the prophet has prophesied, you must make an offering so that you can walk into the prophecy.”

At the front of the tent, below a stage put up by Silk Events, the area is carpeted. The white fur rug on which the prophet rests his feet when he is seated is neatly folded in a chair. People are still streaming in. For every two men, there are 15 women. All show a picture of middleclass; the women are young and stylish, although there are a few strugglers. At the back, sits a hungry middle-aged woman staring morosely at those walking in. “I came here at midday, walking from Nakawa to Kololo. I’m thirsty and hungry and there is no food at home.” This woman has been attending the Fellowship since 2014 and, according to her, the prophet has prophesied over her life many times but none of the prophecies have come to pass. “I still have faith. That is why I keep coming.”

Three giggly women walk by us. Evelyn Kisambira is anticipating a prophecy and an encounter with God. “My cousin tells me there is a presence here and I hope to feel it,” she says. Her sister Jacky wants to meet God and feel the ‘fire’. “If Prophet Mbonye calls my name and prophesies about me, I will believe him.” Stella Namirimu, a banking officer, expects a promotion this year.
At 6pm, an energetic praise session gets underway in the full tent, and 50 minutes later, there is frenzied activity at one of the entrances, with the ushers directing people to other entrances. Four men in charcoal black suits stand a few feet away, one of them wearing a white covert acoustic tube in his ear. In the gathering dusk, at 7.07pm, a three-car motorcade drives through the upper gate of Kololo. The ushers cheer and jump. The cars stop near the entrance and immediately five bodyguards, who include a woman, jump out of the first car and stand near the second car – a BMW X6 whose personalised plates read ‘ELVIS’. A man jumps out of that car and opens the passenger door. Mbonye steps out and walks straight into the tent followed by his security, without acknowledging the cheering ushers.
Dressed in black slacks, red coat trimmed in black velvet, and black patent leather shoes, he walks up and down the aisle in prayer, closely followed by his guards. People are fervently in prayer as the choir sings Roy Fields’ In the presence of angels; some stand. Occasionally, puffs of white smoke rise from smoke machines. Big screens project his image to those at the back.
As he begins speaking, Mbonye keeps referring to a small notebook in which “are over 50 prophecies received in two days of prayer.” Sometimes, he addresses himself in the third person. “We test these things, so today; we will help you … we talk about the veil being open …”
The crowd cheers when he announces that those who sent him prayer requests should tick them off. People are eager for their names to be called. Three women almost jump out of their seats when Mbonye says he ‘sees’ a doctor. They are probably doctors. After an hour of prophecies, Mbonye takes a seat, resting his feet resting on the fur rug, and bows his head in prayer. Two of his bodyguards stand near him. Suddenly, he stands up and walks out of the tent. That is our signal to leave. At 9.30pm, business is thriving outside the gate and security guards at Housing Finance Bank make a killing collecting money off car owners. 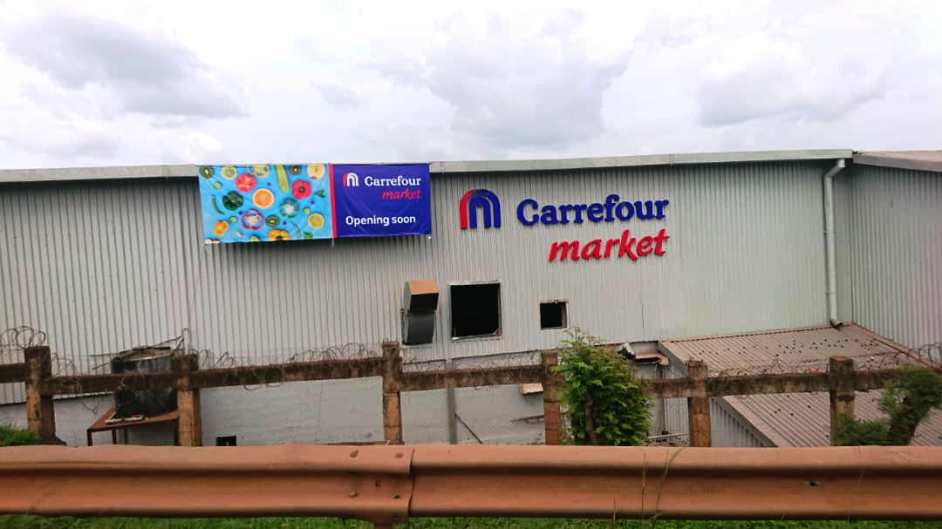