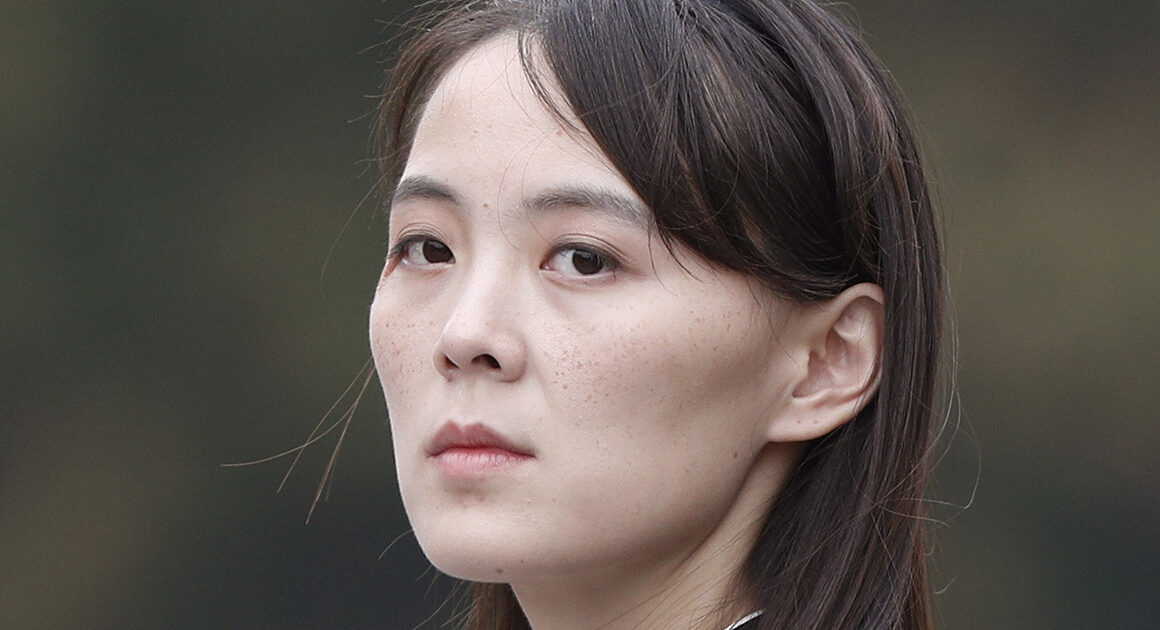 Kim Yo Jong, first vice department director of the Central Committee of the Workers’ Party of Korea, released the following press statement on Friday:

During these days, I have been hearing through the news media a spate of strange signal being transmitted by the Americans with regard to the DPRK.

It was good enough for me to kill breakfast time by watching the TV news about the changes of the Americans’ mind-set who went the length of indicating signals of the possibility of the DPRK-U.S. summit talks.

It is still my personal opinion, however, I doubt that things like the DPRK-U.S. summit talks would happen this year.

But I’m still questioning it.

That’s because a surprise thing may still happen, depending upon the judgement and decision between the two top leaders.

What is clear, though, is that if the DPRK-U.S. summit talks is needed as someone says it would be needed by the U.S. side, but there should be a telling on the part of the DPRK to fathom it over the fact that it is unpractical and does not serve us at all.

Let me assume that the DPRK-U.S. summit talks does occur. The thing is that, in this case, the U.S. would have a sigh of relief by means of dialogue alone with our leadership, buying time to be assured by the personal relations between the top leaders again. But, we have nothing to gain from a negotiation with the U.S., and we do not even harbour any expectation about it.

Serious contradiction and unsolvable discord exist between the DPRK and the U.S. Under such circumstances, I am of the view that the DPRK-U.S. summit talks is not needed this year and beyond, and for our part, it is not beneficial to us unless the U.S. shows decisive change in its stand.

Moreover, I think that we should not accept an offer of the summit talks this year, no matter how badly the U.S. wants it, far from talking about its possibility.

Three reasons behind can be summarized as follows. First, the summit talks, if needed, they will only be needed for the U.S. and they will be unprofitable to us. Second, we will only end up losing time again even though we sit across with the U.S. which does not even have the courage to dare a new challenge, and it would only entail a risk of impairing the special relations that have been maintained between the top leaders. Third, it should not be accepted because it was foretold by Bolton who is a human scum.

What the U.S. actually needs right now is not a summit talks nor its result. Its purpose is to buy time by calming us down and tying us down so as to prevent political disasters in the relations with the DPRK while taking advantage of the friendly relations between the top leaders.

And assuming that we hold the summit talks now, it is too obvious that it will only be used as boring boasting coming from someone’s pride.

The U.S. may still worry about receiving a Christmas gift on the eve of the presidential elections, which it hasn’t received so far.

I consider that it totally depends on how the U.S. behaves itself whether or not it will bump into such a troublesome problem and undergo the pain and suffering.

If it spits out ill-disposed words here and there whenever they feel like doing so from boredom and only clings to useless things such as economic pressure or military threats towards us, we will have to wait and see what happens.

I don’t have any information about such actions, but, to me, it is evident that our leadership will not remain an idle onlooker of various kinds of dangerous and threatening speeches and behaviours of the U.S. towards us.

However, when we are faced with the fact that nothing had happened which the U.S. extremely dreads like now, it makes me think that the unique friendly relations between our Comrade Chairman and the U.S. President are greatly paying off.

If the U.S. carelessly embarks, out of anxiety and fret, on a dangerous action at this time that will invoke our strong reaction, it is evident that it will be tantamount to waking up a sleeping tiger and that the results won’t be interesting.

We should have a proper insight into the ulterior motive of the U.S. behind knocking the tables of the working-level negotiations and summit talks these days.

The U.S. only wishes to buy time, keeping the door open to dialogue and calming us down.

I also have the feeling that the U.S. may have a dark design to return to at least something like the Hanoi negotiation conditions.

At this point of time, when we look back on the early 2019, the U.S., had the possibility to first disable our nuclear mainstay and mess up our long-term nuclear programme by putting on airs of partially lifting sanctions.

It was a time when we were making a great venture at all risks to break the chains of sanctions and promote our people’s livelihood at the earliest time possible, despite the fact that the bargaining terms were not in our favour.

When the DPRK-U.S. summit talks was held in Panmunjom on June 30, 2019, Comrade Chairman defined his clear position to the U.S. President, who preached north Korea’s bright economic prospects and economic aid and asked for further denuclearisation measures as a prerequisite, that we shall never barter our system, the safety and future of our people for the likes of lifting of sanctions of no guarantee in the hope for the glamourous transformation and the realisation of our dreams of rapid economic prosperity. He also made it clear that the sufferings imposed upon us by the U.S. have now turned into the hatred for the U.S., and this hatred would drive us to break through the blockade of persistent sanctions led by the U.S. and to live our own way by our own efforts.

From that time on, we completely ruled out the issue of lifting sanctions from the agenda of negotiations with the U.S.

We are fully capable of living under any sanctions, so there is no reason for us to be driven by the U.S.

I hope that the U.S., at this moment in time, does not harbour such a pipedream as trying to restrike a bargain which was put on the negotiations table at the Hanoi summit talks, which entails the partial lifting of sanctions versus the permanent dismantlement of large-scale nuclear facilities like the ones in Nyongbyon, the central nerve of our nuclear development.

The personal feelings of Comrade Chairman towards President Trump is undoubtedly good and solid, but our government should not adjust its tactics on the U.S. and our nuclear programme depending upon the relations with the U.S. President.

We have to deal with President Trump and the succeeding U.S. administration, and the U.S. at large.

The recent remarks of the U.S. high-ranking officials alone indicate us what we should do in the future regardless of the relations with the President.

The U.S. State Department expressed the intention of dialogue, and even the President indicated the possibility of the DPRK-U.S. summit talks while repeatedly mentioning about the good relations with our Leadership. But the U.S. Defence Secretary has yet again uttered about the so-called “CVID” and didn’t refrain from making hostile remarks of labelling my country as a “rogue state”.

I feel reluctant to comment if such discord between the U.S. President and his subordinates is an intentional scheme or a result of the President’s loose grip of power.

No matter how good the relations between the top leaders of the DPRK and the U.S. are, the U.S. is bound to negate and be hostile to us.

It is high time that we stay alert and allow no single mistake to be made, being only inclined to the personal relations with President Trump.

Recently, the U.S. extended by one year the Presidential Executive Orders on sanctions against the DPRK and took issue with our “human rights situation”, clamouring that the “human rights issue” must be “settled” prior to the improved relations between the DPRK and the U.S. It even went further to re-list our country as the “worst state of human trafficking” and “sponsor of terrorism”. Such targeted provocations in each and every case alone demonstrate that the U.S. hostile policy towards the DPRK cannot be withdrawn under any circumstances.

Even if the U.S. tides itself over the current “crisis” of presidential election, we have to anticipate its endless hostile actions against the DPRK, now that the inveterate negation of the U.S. towards the DPRK has become “endemic”. I think that we should put more efforts to strengthen our capability to cope with the U.S. hostilities towards the DPRK that would continue in the coming days, rather than considering the personal relations with the U.S. President.

We must develop a long-term plan to cope with and contain long-term threats coming from the U.S. and safeguard our national interests and sovereignty under such conditions. We should strengthen and steadily increase our practical capabilities.

There is no need for us to sit across with the U.S. right now, who is obsessed with the thoughts on what and how it can get more from us over the negotiating table, and I think it is the issue to be decided when the major changes are made in the attitude of the U.S.

It would be easier and more favourable for the U.S. to rack its brains to make our nukes no threat to the U.S., rather than racking it to dispossess our nukes.

We do not have the slightest intention to pose a threat to the U.S. and Comrade Chairman has already made it clear to President Trump.

Everything will go smoothly if they leave us alone and make no provocation on us.

We would like to make it clear that it does not necessarily mean the denuclearization is not possible. But what we mean is that it is not possible at this point of time. I remind the U.S. that the denuclearization on the Korean peninsula can be realized only when there are major changes made on the other side, i.e. the irreversible simultaneous major steps to be taken in parallel with our actions.

I have to point out clearly that it does not mean the lifting of sanctions when we refer to major changes from the other side.

I personally did not want to write this kind of statement towards Americans, if not towards south Korea.

Last but not the least, I would like to give my impression on the celebrations for the U.S. Independence Day that I’ve seen on TV a few days ago.

I have got the permission from Comrade Chairman to personally obtain, for sure, the DVD of the celebrations for the Independence Day in the future, if possible.

Comrade Chairman has entrusted me with conveying his wishes to President Trump that he would certainly achieve great successes in his work.