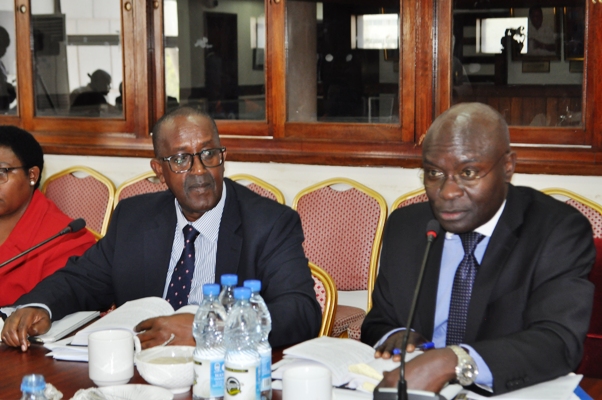 The Electoral Commission has revealed that it doesn’t recognize the withdrawal of Judith Adyaka Nalibe as the FDC flag bearer from the upcoming Kaabong District Woman MP by-election.

The FDC candidate wrote to the EC declaring her withdrawal from the race, leaving the NRM candidate Christine Tubo Nakwang unopposed citing failure to obtain support from her party, a move that left FDC officials seething with anger and the Party threatened to drag EC to court if it allows Adyaka’s withdrawal.

During a second meeting held between the Commission and Legal and Parliamentary Affairs Committee to discuss the five bills tabled by government on electoral reforms today, Simon Byabakama, the EC Chairperson told MPs that according to section 19 (2)a of the Parliamentary Elections Act, a candidate can only withdraw their candidature if their withdrawal letter is signed by the secretary General of the sponsoring party (in this case FDC).

He noted that the Commission is now caught in a predicament where a candidate that has declared disinterest in the process is tied by the law to take part in it yet the Commission cannot declare the NRM candidate Nakwang unopposed even though Adyaka is no longer campaigning.

Business Focus understands that EC has since written to FDC Secretary General in reference to the communication from Candidate Adyaka Nalibe notifying the Commission of her withdrawal from the Parliamentary by-election for the Woman Representative to Parliament for Kaabong District dated 12th September, 2019, and FDC’s objection thereto dated 16th September, 2019.

The letter adds: “While the Commission did receive Candidate Adyaka Judith Nalibe withdrawal letter, the same does not comply with the foregoing provisions of the law.”

BoU Boss: Crane Bank Sale To Dfcu Was A Blessing