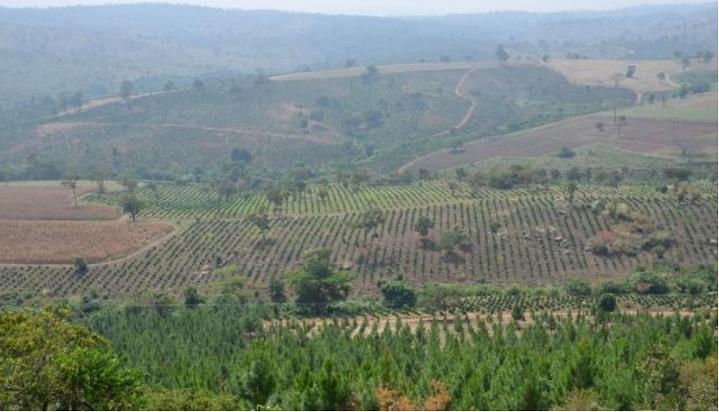 An overview of Ian Clarke’s coffee farm in Kyenjonjo

Over the past few years I have gone into farming. This does not mean that I am no longer involved in healthcare, but I am not directly running a hospital or treating patients.

For the last six years I have spent much of my time developing some land in Kyenjojo District, and as I write I am sitting looking out over the farm that is the result of my labours.

I was brought up on a farm in Northern Ireland, but the farming landscape in Uganda is very different from Ireland because most farmers here are subsistence farmers who cultivate only a few acres while farming in Ireland is a business.

Around 75% of Ugandans live in rural areas and get their income from the land but there are relatively few medium and large-scale commercial farms.

Several years ago I acquired a piece of land that was free of squatters.

Although some Ugandans own large tracks of land, much of it has been settled by squatters whose tenancy is protected by the law, so the ownership can take years to sort out.

My first task was to clear the land, which was done by hand, though I also used a backhoe to root out tree stumps.

Over a period of six years the landscape has been changed as I have planted various crops including coffee, macadamia, eucalyptus, maize, and Irish potatoes.

The farm is set among rolling hills with several rivers and streams, where the natural ecosystem was preserved and we planted indigenous trees and bamboo.

This has created beautiful river walks.

There is a rocky hill in the middle of the farm that was unsuitable for planting crops, but has a 360 degree view over the farm.

I used to come up to the top of this hill, sit on a rock and enjoy the view.

Then I cleared away the long grass exposing a rocky landscape, and decided to take advantage of the natural features to make the hill into a huge rock garden, with stepping-stones for people to walk around and appreciate the natural beauty.

We hauled it to the top of the rocky hill and set it on pillars cantilevered from the side of the hill.

Now I live in a shipping container with the best view in the world. I should add that the container was fitted out with a veranda, bedroom, en-suite bathroom and living room.

Since this hill had the best view of the farm I decided to build a small coffee lodge for guests and visitors so that I could showcase farming in Uganda.

I used local materials – eucalyptus poles from the forest for the structure, and eucalyptus timber for flooring and ceilings, local clay bricks and local stone for the walls.

Water is pumped from a stream using a solar pump while hot water is provided through a solar water heater. Electricity is from solar panels, so the whole lodge is echo friendly.

This year has been a difficult year for farming since there was a dry spell just when the coffee beans were being formed, which meant that the trees made only one bean in each cherry instead of the normal two, therefore the yield of coffee was half what it should have been.

As I look back over rainfall patterns it seems that the amount of rainfall is decreasing, so I will need to plan ahead in terms of water conservation and storage dams.

The farming journey has not been easy, but the hard parts are compensated by the seeing the land being transformed from bush to a managed landscape – like painting a picture.

The Israelis had very inhospitable land, but they made the desert bloom and now some of the most advanced farming techniques in the world come from Israel.

When I see the rich land we have been given in Uganda, we should be making more of it.

Food production is essential for the future, and Uganda is well placed for agricultural production.

As I continue in farming my hope is that more Ugandans will invest in the land and carry out commercial farming.