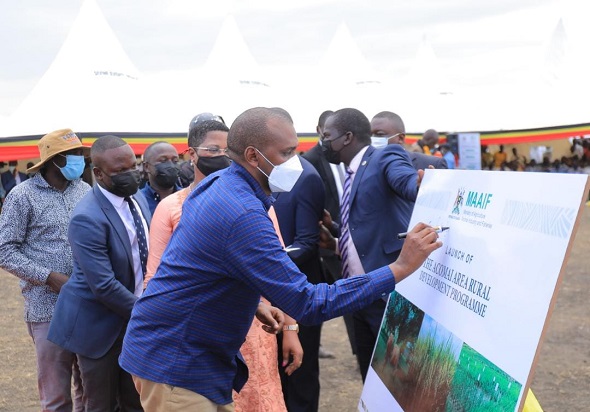 Earlier today, the Minister for Agriculture, Animal Industry and Fisheries Frank Tumwebaze together with Deputy Speaker of Parliament Anita Among flagged off the construction works for the Acomai Irrigation scheme. The Shs 71 billion scheme will serve an area of 2200 hectares.
“As we implement this project, we are aware that compensation can be a bottle neck but we have set money aside to handle people that need to move. We have thus far provided for Shs1bn and will together with colleagues here advocate for more,” Tumwebaze said, revealing that the Deputy Speaker Anita Among donated part of her land for the project. “She has paved way for us, despite the fact that we have been delayed by compensation of the Project Affacted Persons (PAP)” Tumwebaze noted. He added that: “We have some money for the compensation. So far, we have 1 billion. It is not enough. That’s like 50% of the amount we require but with the support of the Deputy Speaker and the friendly forces here, they will give me the deficit and i clear compensation.”

The funds (Shs 71 billion), Tumwebaze said will construct an irrigation scheme, there will be a a warehouse, rice drying yards, a bridge, a support to a school, construct 58 kilo meters of road

He begged locals not to stop the contractor, pledging to sort the issue of compensation.
The Minister also emphasized the fact that the Agriculture Value Chain Development strategy would be adopted in the implementation of this project for sustainably increased household incomes.

Peter Ogwang, the Minister in Charge Economic Monitoring in the Office of the President emphasized the need for mindset change, beginning with the civil servants. He appealed to Tumwebaze to have MAAIF retool district production officers countrywide for better service delivery along the value chain.

Deputy Speaker Among greatly appreciated the Ministry and its leadership for making the Acomai dream a reality. She appealed to the project leadership to consider setting up a vocational training institute as part of the Rural Development program.

“Hon. Minister please keep a keen eye on the contractors. If unsupervised, they could easily turn our dream into a nightmare. I volunteer myself to monitor and supervise this project so that our dream will fully be realized. Thank you once again for bringing this project home,” Among said.

According to Among, the irrigation scheme is the first of its kind in Eastern Uganda. Among commended government for initiative, MAAIF for following the project up and Parliament for allocating the funds.

She pledged to support MAAIF to allocate funds needed for compensation. Among said tasked Ogwang to assign officers in his office to monitor the project, adding that she will equally monitor the project herself. Among pledged a technical school in the area to adress the skiling gap which she said was worsened by the outbreak of Covid-19.

Additionally, the Minister launched the Acomai Rural Development program which will see the community sustainably developed through the set up of warehouses, 9 livestock watering units, schools, 58km of roads within the scheme and connecting to the main roads, bridge, extension and marketing services for the following commodities: rice, beef, maize.

Also in attendance were 40 MPs and district leadership from Bulambuli, Bukedea and Kaberamaido. 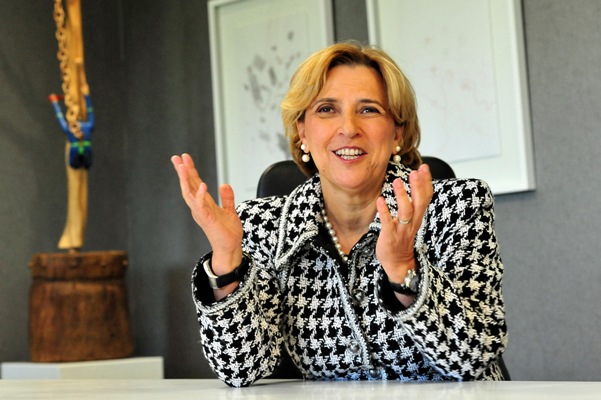 Parliament To Debate Online Via Zoom To Reduce Overcrowding