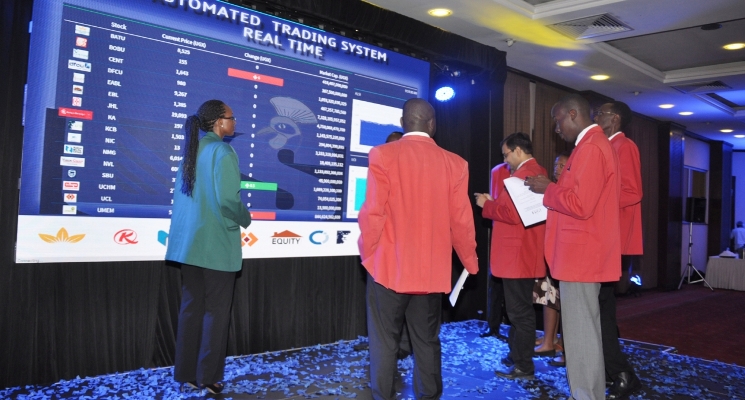 Umeme and Stanbic were the most traded counters on the Uganda Securities Exchange (USE) at the end of November 2020 according to top officials on the bourse. Umeme traded 75 million shares worth sh17b, taking up 64.8% of total turnover, and 22% of total traded volumes.

Stanbic bank traded 256 million shares worth sh6.3b which was 74.5% of the total volume of shares on the bourse, and 24.3% of total turnover. Paul Bwiso, the USE chief executive officer noted that bourse closed November with total turnover worth sh26b from 343.5 million shares traded.

“There was a decline in the number of new accounts opened. Due to the impact of the lock down, we had the lowest ever level of activity in July. There was one day when we did not trade due to internet connectivity issues,” Bwiso said at the annual issuers forum held virtually this year.

He added that the USE is looking to improve its game in the area of private placements.

Keith Kalyegira, the Capital Markets Authority (CMA) Chief Executive Officer noted that governments treasury bonds of the longest tenures in Uganda, such as those of 10 years and 15 years are mostly illiquid. Further more, he noted that the market for treasury bonds is mostly at short end, with 80% of bonds actively traded are 2 years and shorter tenures. “There is illiquidity of government bonds which affects liquidity of corporate bonds,” Kalyegira said.

He said that since traders were unable to travel to China during the lock down, the amount of wealth in the hands of the business community has grown. He said that traders will need to place that wealth in instruments that preserve their capital.

“We need a whole new degree of innovation. This calls for a lot of ingenuity and creativity. Capital preservation is the name of the game,” he said.

Gertrude Wamala Karugaba of Sebalu and Lule Advocates noted that the capital markets needed to step up to provide patient capital for businesses that are looking for growth in an environment that is characterized by liquidity risk.

By the Capital Markets Observer

Shilling Weakens On The Back Of High Corporate Demand