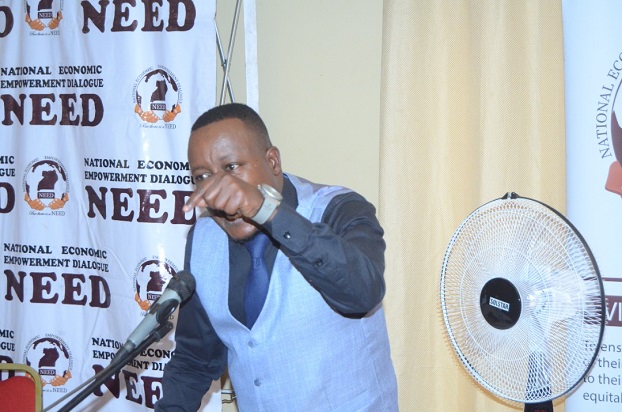 The National Economic Empowerment Dialogue (NEED) leader Joseph Kizza Kabuleta (pictured above) has cautioned the people of West Nile against feeling self pity due to the biting poverty in the sub region.

He said the residents are not poor, but rather they just need to be economically empowered.

Kabuleta made the revelation while meeting the local leaders and residents of West Nile on Wednesday, during his current nationwide sensitization campaign premised on protecting Uganda’s national deposits that could be used by citizens to alleviate themselves from poverty.

“The main challenge here is that you are so divided because of the different political parties you belong to thus you end forgetting to focus on issues that would benefit you.It doesn’t matter whether you belong to NRM or any other party, the issues affecting you as residents of this area are the same. The poverty you face is the same,” he asserted.

The former presidential candidate further advised the locals to forego their political differences if they are to develop their area.

Apart from the abject poverty in the area, the residents also complained that they lacked proper/standard schools and health facilities in the sub region.

In his response, Kabuleta said the facilities are in place but the residents did not have the financial muscle to access them.

“Those facilities are in place for those who have money but the key for your families to benefit from good education or health services is about being financially stable. So how are you striving to ensure that you benefit from the economic prosperity in your area? When you’re economically empowered, all the good life you desire, will come your way.

” On the issue of poor roads, long time ago, local government used to construct roads here but as time passed by, they were stripped off some of their powers because most roles were handed to Central government and we know that when a service is taken by Central government, it doesn’t come back these ends. Now you people you have to fight for yourselves and ensure that you benefit from your area wealth. You have the border advantage , oil and other minerals. You don’t have to beg to benefit from them, claim them because they belong to you,” he concluded.

NEED, a political movement under the stewardship of Kabuleta has so far managed to spread the economic empowerment message to Buganda, Bugisu, Bukedi, Teso, Sebei, Lango, Acholi and West Nile sub-regions.