Fear of competition from foreign entrants caused Nakumatt Supermarket to divert billions of shillings into a rapid expansion in a bid to lock them out of strategic locations, reports the Standard.

In an interview with an insider, news of entry of new players caused panic within top management of Nakumatt, triggering a costly expansion programme which backfired and ended up sucking up all the money the retailer needed to stay afloat.

To make it hard for them to set up, Nakumatt rushed to ‘snap up’ key locations that would have been a target for the international players.

Among retailers that were looking to enter the market at the time were French retailer Carrefour, South Africa’s Game and Botswana’s Choppies, who are now setting up in the country without a fight.

But this strategy was a big miscalculation because it underestimated the amount of investment it needed and the financial strain it would put itself into.

The plan was to roll out 24 new stores between 2015 and 2017, according to a financing document seen by the Weekend Business. This would have seen it open on average one new outlet every month and the target was 77 branches by the end of this year.

The ambitious plan collapsed mid-way after the new branches ended up locking up billions of shillings that had been diverted from suppliers and other creditors, making it the last straw to push the retailer into financial ruin.

“There was panic and this is what caused the rapid expansion. The money we could have used to pay suppliers was used in this expansion,” an insider in Nakumatt said in an interview.

The retail chain also had to buy out shares held by wealthy businessman Harun Mwau, who was described as a ‘minority shareholder.’

The businessman sold his 7.7 per cent minority stake in Nakumatt Supermarkets for undisclosed amount, to pave way for entry of a strategic investor from abroad.

Sources say the deal flopped when an audit found that Nakumatt’s books were in bad shape.

With this valuation, Mwau could have pocketed about Sh3 billion for his stake. That valuation is highly unlikely today considering that Nakumatt has shut several of its branches.

Nakumatt’s payment to Mwau for his 7.7 per cent stake could have also put a lot strain on the retailer’s finances.

The source said the retailer pumped most of the billions it borrowed into this expansion programme and diverted part of the money owed to suppliers to buy stock for the new branches.

In December 2015, Nakumatt sunk Sh200 million in Busia and Bungoma branches to push its total branch count to 57. In March 2016, it then opened another branch in Kakamega to complete the remodeling of the three supermarkets acquired from Yako Ltd at a cost of Sh260 million.

“Opening a new branch is not cheap. For about 30,000 square feet, you need about Sh250 million worth of stock on the shelves. To recoup this takes between four to five years,” he said.

The source, who spoke on condition of anonymity due to the non-disclosure agreements that are in place said that the retailer also needed between Sh70 million and Sh80 million to take care of other startup costs which are not recoverable immediately.

But once its costs overtook its revenues, the firm started defaulting on its main obligations among them lenders, landlords and suppliers, making it impossible to turn itself around.

It has also emerged that the retailer could have taken up between Sh6 billion and Sh7 billion worth of debt from private individuals through commercial papers who bought into this expansion dream. “It crashed so fast between December and March 2016.

It was a mistake to finance this growth from our cash flows. The firm should have looked for other sources of finance and also approached growth with caution,” he said adding that despite the supermarket having one of the best security and inventory systems in the country, it reported higher pilferage percentages than international averages.

Most of those branches that it opened under this plan have now been shut. The retail chain has shut down or been kicked out of at least 20 outlets since the beginning of this year.

It has so far closed seven branches in and around Nairobi among them those that had been located on Ronald Ngala, Haile Selassie, at Thika Road Mall, Next Gen Mall, Lunga Lunga, Junction and Westgate Malls in Nairobi. Outside Nairobi, the other outlets that remain closed are the Nanyuki branch, Bamburi branch at the coast, Eldoret town branch, Kisii branch, Nakumatt Nyanza, Bungoma and Busia branches.

In Uganda, it has been forced to vacate its branches that had been located at Katwe, Acacia Mall, Victoria Mall and the Village Mall. In Tanzania, it has shut down its Mlimani City branch and its Arusha branch. It is now left with about 44 branches in the region. The retailer said it release the list of other branches that will be shut.

A brief on one of the short term financing plans that the retailer chose as an alternative to meet its growing cash flow requirements showed that Nakumatt’s fortunes began dwindling at least two years before this rapid expansion plan.

In the Sh2 billion short term note programme brief, the retailer noted that food and drink part of its business constituted half of revenue for the retailer and was its single largest segment of the business. The second segment was the lifestyle segment which contributed 27 per cent of its revenue while the non-food household goods contributed for the remaining part of its revenue. The documents also show that the profits for the firm started taking a downward spiral, despite an increase in revenue, from as far back as 2013, but the retailer kept hoping that it’ll be able to reverse the dwindling fortunes before it was too late.

Whereas its revenues were growing by about Sh4 billion per year between 2013 and 2015, its net profit was shrinking by about half every year. For instance in 2013, the retailer posted revenues of Sh43.8 billion, which grew by Sh4.1 billion to hit Sh47.9 billion in 2014. However, in that period, its profits contracted by 46 per cent from Sh462 million in 2013 to Sh248 million.

The trend was also replicated in the following year where the firm’s revenues grew by another Sh3.7 billion to hit Sh51.6 billion.

The reverse was, however, happening on its bottom-line after its profits after tax shrunk by a further 45 per cent to hit Sh135 million in a trend that if sustained would have automatically thrown the firm into the red the following year.

As this was going on, the retailer was piling up debt by a near similar amount as its growth in revenue. Its total debt grew from Sh8 billion to Sh11.5 billion in 2014. It further took up more debt in 2015 to push its total debts by the close of that year to about Sh14.8 billion.

Its debt has since grown to more than Sh30 billion. Another source familiar with its financial woos said that the retailer ignored early warning signs to take a break on its borrowing spree.

“We had a discussion with some of its managers when they were sourcing for finance that they now needed to consider looking for alternative ways to fund its business other than debt but this was not taken as positively as we had hoped,” the source said.

All this time, the retailer was in net negative operating cash flows. Negative cash flows can signal that a company has operating expenses that have not been turned into cash profits yet. It signifies that a company is losing money and its operating expenses such as salaries, overheads and costs of goods sold are higher than its revenues. If such a firm does not reverse this trend as soon as possible, it eventually goes bankrupt.

At this time, the firm’s credit rating by the Global Credit Ratings (GCR) company was at B/BB, which meant that it had a highly uncertain capacity for timely payment of financial commitments.

“This is the second worst rating and a sophisticated investor would not have put any money in the company,” the source said.

GCR said that a ratings upgrade for the retailer is only likely once it reports improved credit risk metrics, as well as sustained positive operating cash flows.

It was at this time that the retailer turned to private individuals to source for additional financing to meet its working capital needs. According to an information memorandum shared by Dry Associates, the key organisations used by Nakumatt to seek for money from private individuals, the proceeds that were to be raised in the issue were to be used by Nakumatt to meet its working capital needs.

“By allowing Nakumatt to choose the timing and size of the note issues, this programme provides more flexibility that would otherwise be available through the use of commercial bank overdraft facilities alone,” the brief reads in part.

The retailer declined to comment on how much it raised on the commercial paper in total and instead asked us to speak to Dry Associates, which was the arranger of private financiers. But when we contacted Dry Associates, it tossed us back to Nakumatt and refused to reveal how much it raised and if these financiers have been paid. But a source said the amount could be between Sh6 billion and Sh7 billion, and was mostly sourced from ‘unsophisticated’ individuals.

“The firm told investors that the short term note had been insured 80 per cent and this was enough to convince investors to jump on the train. But looking at their credit rating at the time, no sophisticated investor would have bought it,” the source said.

One of the prospectus showed that it was looking for Sh2 billion. We presented a copy of the document to a highly placed source within the firm who confirmed that the transaction happened.

Dry associates discloses on its website that it has arranged financing for Nakumatt before.

In the brief it has declared that it raised a short term loan of Sh500 million. But it is the grooming of Atul’s two sons to inherit the leadership of the firm that irked its key staff, who abandoned the retailer when it needed all the expertise it could get to stop its bleeding.

“Atul would go to important meetings with his sons and when you know that someone else is being prepared for your job, you must look for an exit. That is why they left. Everything started falling apart after the finance boss left,” the source said.

“Atul valued his firm too high for any investor to put in money. Most of the investors were turned off because what he asked for and what they were willing to pay was worlds apart,” the insider added.

The fate of the retailer will be known next week, when the High Court in Nairobi is expected to rule on whether it will be allowed to appoint an administrator to keep the business running or await liquidation.

If the court rules its way, the firm will be looking at its rival Tuskys to inject Sh650 million into its operations and offer loan guarantees of between Sh1.5 billion and Sh3 billion for the outstanding debt.

The plan is to have Tuskys, which has expressed interest in acquiring a 51 per cent stake in Nakumatt, also issue guarantees to suppliers. But no one is talking about who will repay the nearly Sh40 billion it owes lenders and suppliers.

The retailer had sought 60 days to complete the proposed takeover deal with Tuskys and come up with a new strategy for the settlement of debt.

The firm has proposed that Peter Obondo Kahi, PKF partner in charge of forensic and business recovery in East Africa, be appointed by the High Court to lead its recovery.
Credit: The Standard

One thought on “HUMBLED GIANT: Inside Story of Rise and Fall of Nakumatt Supermarket” 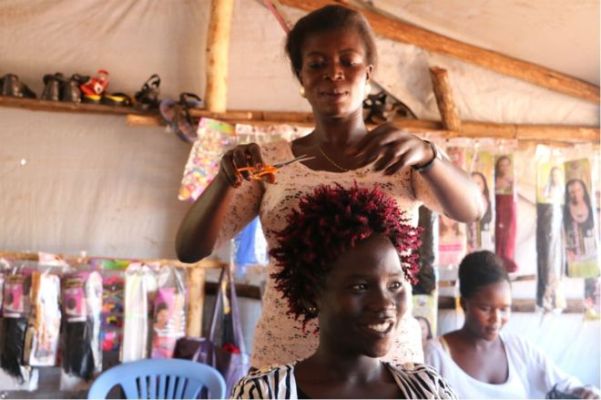