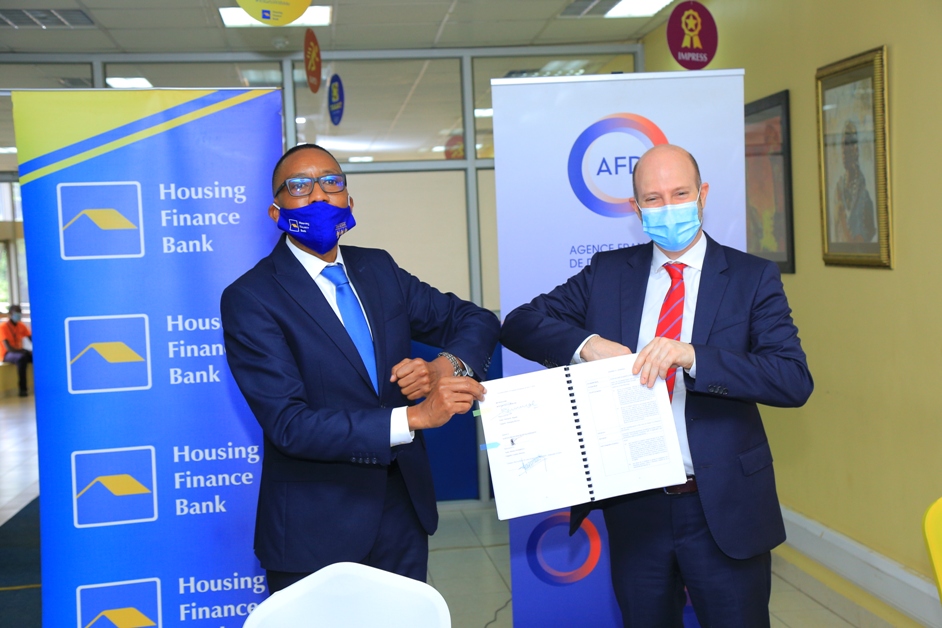 The line of credit and technical assistance aim at supporting the development of a housing finance offer adapted to the needs of the populations all over Uganda.

The signing was done in the presence of  Jules-Armand Aniambossou, Ambassador of France to Uganda.

The euro 10 million line of credit from AFD aims to finance the deployment of Housing Finance Bank’s housing microfinance and affordable housing offer, enabling them to diversify the mortgage loan offer to include low and middle-income populations, who currently do not have access to an adequate financial offer.

“We are proud to be associated with The French Government and AFD regarding the mutual objective of contributing to the economic development of Uganda especially through enabling people build affordable and decent housing incrementally which is the preference for most Ugandans,” Mugabi noted.

He added: “The dire need for decent housing especially for low income people in the informal sector which accounts for most of the population in the country remains a big concern for the Government of Uganda and Housing Finance Bank. Together, We shall enable home ownership to the majority of the Ugandans that would otherwise not be able to because they can’t afford it, or don’t have a title for the property or don’t have a formal job.”

In order to create an affordable housing financing product, Housing Finance Bank partnered with Habitat for Humanity (HFH) to conduct a market study in 2018 on housing financing opportunities for low- and middle-income populations. The results of this study were very positive and showed a strong potential for Housing Finance Bank in the low-income segment, especially regarding loans for incremental and/or self-built housing, as well as a micro mortgage loan for housing.

AFD’s financing will enable HFB to roll out its microfinance offer in its 19 branches located throughout the country. The loans will average euros 4,200 (Shs18.7 million) and target populations earning between euro 45 and 450 monthly (between Shs200,000 and 2 million).

Additionally, a euro 500,000 technical assistance will enable the Bank to strengthen its skills to provide products adapted to the needs of the populations. This grant will be used to reinforce the capacity of local builders in order to develop green housing solutions and improved construction techniques.

According to  Jules-Armand Aniambossou, “The financing agreement we are signing today is the result of a long term cooperation that started in 2011 between the Housing Finance Bank and the French Development Agency, France’s public bank. Since then, both institutions have learnt to know each other, resulting in this ambitious programme that will improve the lives of many Ugandans. Access to home ownership and affordable housing is a vector of social integration and a factor of human development. Decent housing improves people’s living conditions and has a positive impact on the health and education, and it is important to France to play a supporting role in this matter.”

Bagyenda Aide Tells MPs: ‘Parliament Has No Powers To Summon Me’