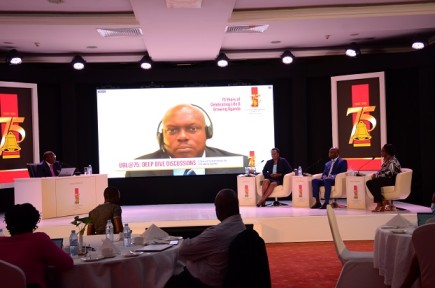 Uganda Breweries Limited (UBL) has has paid Shs7.4 trillion in taxes to Uganda Revenue Authority (URA) in its 75 years of operating in Uganda.

This is what over three Ministries, Departments and Agencies (MDAs) of government could survive on for a full financial year.

This revelation comes out  as the brewery marks 75 years of doing business in Uganda.

In 2020 alone, UBL paid Shs420 billion in taxes, making the brewery the 7th top taxpayer in Uganda. As a result, UBL contributes 0.4% to the country’s GDP.

These revelations came up as current and former top managers of UBL convened at the Serena Hotel in Kampala on Tuesday to reflect on the journey of UBL.

Mugerwa, the non-Executive Managing Director at the UBL says that UBL at 75 has been possible because of what he described a “masterful leadership” from the board to management.

He says that outside investment in the brewery, UBL invested socially. For instance, last year, UBL invested Shs4 billion to give access to clean and safe water to the people of Bududa.

Mbugua attributes UBL’s journey to stakeholder partnerships. “We are stronger together. We can go further together,” he says.

He added that with the partnerships, it has been more of a chicken and egg.

“We must create something that creates winning for everyone, not just UBL. Partnerships help us to grow shared values in the ecosystem,” he said. The other element he says is the trust and the respect the consumers have for UBL.

“The values that our consumers know that we stand for,” he notes. According to Mbugua, UBL is a listener, and adjusts where possible according to the demand of the consumer.

According to Muyombo, it has been about advertising and marketing. “I am so proud that we have continued to contribute to the concept of art, music, games and sports. These contribute to social economic development,” she says.

Muyombo says advertising helped UBL get closer to the consumer. Other areas leading to UBL’s story at 75, Muyombo says are the marketing agencies, the supply chain, innovation and the distributors among others.

Ocici, currently based in Dar es Salaam in Tanzania says that it has been about shared prosperity. He says that UBL does what it does for the farmer, the people and the environment among others. Ocici adds that there has also been the element of governance, acquisition and government intervention among others.

On the question of UBL’s operation during the pandemic, Ocici says that it is about continuously listening to the consumer about what they want and how to be served. He said online orders and delivery picked up but said that is just one channel. Mbugua agrees with him.

After 75 years, Karuku says that UBL will continue to invest in the brands, route to the market, e-commerce, spirits and wines shop and environmental investments (green energy) among others.

According to Ocici, “you either innovate or die.”

Looking at UBL’s vision, Ocici says that the quality of partnerships will define what the brewery will look like after 75 years while Mbugua says that at 100 years, UBL should be listed with 100 other companies running together, smoothly like UBL.

Karuku says that: “We want to continue to be trusted and respected across the value chain. We must continue to play our role.”