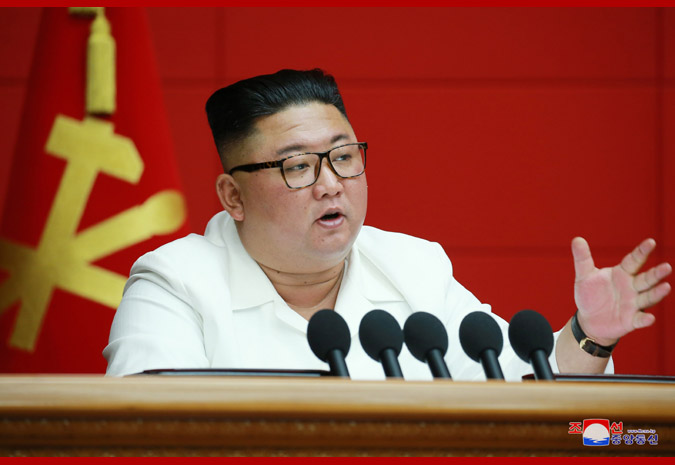 Supreme Leader of the Party, the state and the armed forces of the DPRK Kim Jong Un, chairman of the Workers’ Party of Korea, guided the plenary meeting.

Officials of departments of the Party Central Committee were present as observers.

The meeting discussed as the major agenda the issue of convening the 8th Congress of the WPK to set forth a new line of struggle and strategic and tactical policies on the basis of the requirements of our developing revolution and the changed situation, and to further strengthen the Party organizationally and ideologically.

Upon authorization of the Political Bureau of the Central Committee of the WPK, the respected Supreme Leader Kim Jong Un presided over the meeting and made a historic speech.

In the speech he analyzed the subjective and objective environments this year in which we faced unexpected and inevitable challenges in various aspects and the situation in the region surrounding the Korean peninsula, and assessed achievements and shortcomings that have been seen in the Party and the state affairs for the past four years since the historic 7th Party Congress.

He made a detailed report on the accomplishment of goals of various sectors of the national economy for this year, the last year of attaining the goals of the five-year strategy for national economic development set forth in the 7th Congress of the Party, in particular, and analyzed the results.

He said that the Political Bureau of the Party Central Committee suggested convening the 8th Congress of the WPK to analyze and review in a comprehensive, three-dimensional and anatomical way the deviations and shortcomings in the work for the implementation of the decisions made at the 7th Congress of the Party and to discuss and decide on the strategic tasks for the Party and the government in the new phase of struggle in the crucial period of our revolution.

Calling for regularly convening the congresses of the Party, the supreme guidance organ of the Party, in order to confirm the line, strategic and tactical measures for steering the development of the times and the revolution and adjust and reinforce the leadership body for guaranteeing their execution, he advanced the important guidelines for the operation of the congress.

He said that the 8th Congress would review this year’s work and the work of the Central Committee of the Party in the period under review and set forth a new 5-year plan for national economic development including next year’s orientation of work.

The Supreme Leader stressed the need for all the sectors and units including the Party organizations at all levels, power organs and organs of the armed forces to regularly in time sum up the results of the work so as not to deviate from the implementation of the Party’s basic lines, policies and decisions. He also said that they should encourage and develop good successes, overcome shortcomings and take rectification measures at the double and thus achieve new progress in advancing the revolution and construction and in strengthening the Party.

The Supreme Leader called on all the participants to greet the 8th Congress of the WPK with high political zeal and shining feats of labor by pushing forward the work of developing the internal potentiality and the motive force as required by the offensive for making a breakthrough head-on along with the major tasks set forth at this year’s meetings of the Political Bureau of the Party.

The Supreme Leader read out a draft decision of the plenary meeting on convening the 8th Congress of the WPK.

After he read out the draft decision on convening the Congress which will be recorded as another special event in the path of our glorious Party, all the participants fully supported and approved the agenda that had been taken up in the meeting with thunderous cheers and applauses.

The plenary meeting decided to convene the 8th Congress of the WPK in January, Juche 110(2021).

The historic decision is an indication of the self-confidence of our Party leading the overall activities of the Party and the state to the new higher phase as required by the developing revolution, and an expression of the strong will and solemn pledge of our Party to live up to the great trust and expectation of our people by fulfilling its duty while shouldering upon itself the future of the country.

Remarks by the Director General of the Department of Energy; Mr. Thabane Zulu at the 6th Annual Africa Power Roundtable