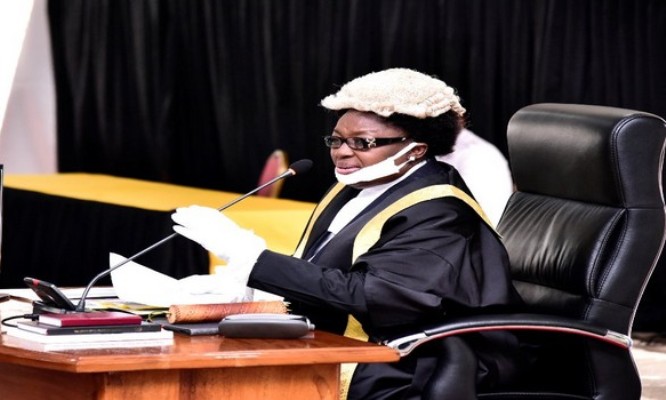 Shocking details have emerged of why opposition lawmakers appeared to give their support to speaker of parliament for the ruling National Resistance Movement (NRM) party top job.

Kadaga wants to retain her seat as National Vice Chairperson for the party but is however, facing serious challenge from lands state minister, Persis Namuganza.

Last week, a section of opposition MPs led by Cecilia Ogwal sang and danced praises for the Speaker of Kadaga to retain her national vice chairperson (Female) in the on-going NRM central executive committee elections.

“It was shocking to see opposition lawmakers supporting her for a post in the ruling party. It raised some eyebrows of course,” the source said.

This came as a shock to many but our investigations have three leads as to why members of opposition groups would take sides in the NRM elections to the extent of vowing to reach out to Kadaga’s opponents like State Minister of Lands Persis Namuganza to step down.

Privileges; Members of parliament across the political divide work so hard to catch the eye of the speaker for selection on foreign trips more than they would fight to be picked to make a point on the floor of parliament. These foreign trips are a big deal due to the amount of exposure and per diem that comes with it. It’s for this reason that MPs including Ogwal want to be seen praise singing Kadaga because of these parliamentary privileges.

Ogwal closeness to Kadaga. For a long time now, Hon. Cecilia Ogwal and Kadaga have been friends due to their longevity in parliament. Sources intimate to us that it’s the same Ogwal that was enthusiastic drumming up women movement voices to support Kadaga when she faced off with Oulanyah in the last speaker elections where eventually Jacob stepped down.

Presidential ambitions. To Kadaga supporters, they have always seen her as a potential for presidency, and this was re-echoed by Mukono Municipality MP Betty Namboze of DP on NBS where she openly expressed impatience with Kadaga for taking long to declare her ambitions to run for president.

We wait to see more unfolding events in these hotly contested NRM CEC elections where new comers seem to have upstaged the current members.