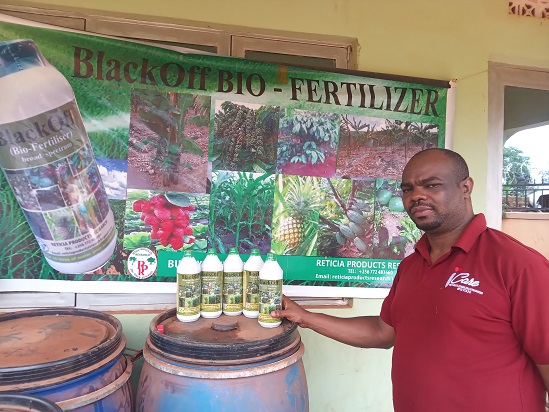 Andrew Ssewanyana with samples of Black Off Bio Organic Fertilizer

On August 19, 2022, the Agricultural Chemicals Board under the Ministry of Agriculture, Animal Industry and Fisheries (MAAIF) approved the registration of ‘Black Off’ Liquid Organic Fertilizer, a broad spectrum pest-repellent natural fertilizer under Reticia Products Research.

The product was approved after Government-owned Namalere Agricultural Centre carried out extensive research on the product and found its composition to be NPK 4:14:11+Amino Acids (in technical terms).

However, the journey to the birth of this product is quite interesting.

Andrew Ssewanyana, the brain behind this wonderful organic fertilizer, is a trained electrical engineer, who never thought of innovating something that would benefit farmers.

He would move to various parts of the country wiring houses with the aim of growing his career and business as an electrical wireman.

In 2014, Ssewanyana met a coffee farmer in Kyotera district who showed him how Black Coffee Twig Borer (BCTB) had affected his garden. Ssewanyana was in the area for electricity installation.

In an exclusive interview with Business Focus on Thursday at his temporary work station in Sumbwe, Bulaga located approximately 10 kilometers along Mityana road, Ssewanyana said he was surprised when the farmer asked him if he could get them someone with a solution to deal with the devastating BCTB.

This got Ssewanyana thinking; how can I help this farmer? Why me? Why didn’t he (the farmer) ask agronomists and scientists? He wondered.

It is at this point that he read widely about BCTB and realized it wasn’t a challenge to farmers in Kyotera, but the whole of Uganda and the world at large.

“As a believer, I asked God to give me wisdom so as to come up with a product that could help farmers deal with BCTB,” he says, adding that he immediately embarked on research aimed at developing an organic product that could wipe out BCTB.

He picked different plant species after carefully carrying out research on them and took them through a 30-day fermentation process.

He gave out samples of the product to various farmers and got varying results.

“It would kill some of the pests instantly and in other cases, the older pests would be paralyzed and die of hunger after some time,” he says, adding that he continued improving the product until it gave better results.

He adds that many farmers gave him wonderful testimonies, with many saying their plants became dark green and healthier after using the product.

“The product protects crops against too much sunshine. When the sun rays hit the crop, they can’t destroy the evaporating moisture in the plant. This means the plant keeps its water,” Ssewanyana says.

It is at this point that he realized that ‘Black off’ could work as a fertilizer, a pesticide and a water retention product. The product was named ‘Black off’ because his research was a result of Black Coffee Twig Borer infestation in the country.

He took his product to National Coffee Research Institute (NaCORI) in Kituza, Mukono, to test its effectiveness.

“In March 2015, NaCORI gave us their first report that indicated that our product was 66% effective against BCTB. When they did their second trial, they doubled the application of the product. For example, if they used 50mls per 20 litres of water, they increased it to 100mls and the results were great. Its efficacy was over 73%,” Ssewanyana says, adding that his product beat many synthetic pesticides in efficacy.

He says the NaCORI report guided them to double the various plant species they use while making the broad spectrum fertilizer.

Although he didn’t reveal the various plant residues they use to make the fertilizer, Ssewanyana says they source the materials from farmers.

“Many farmers see them as weeds but we see them as resourceful materials. For example, we can ask a farmer to clear his garden full of black jack which is one of the plants we use in making the fertilizer,” he says, adding that since their product is organic, they plan to plant their own local materials to ensure they are not contaminated.

The main ingredients of the product are lauric acid, tannis and flavonoids.

At the moment, Ssewanyana says he doesn’t have any scientist or agronomist on his team. He currently employs five people. That he only uses scientists to do his paperwork.

He says the product was officially launched in Kyotera in May 2015 and Gerald Ssendaula, the former Minister of Finance, who was the Chief Guest uses the product.

He reveals that the product can be used on various crops including coffee, cocoa, avocado, bananas (matooke), pawpaws, cassava, tomatoes, watermelon, maize and beans among other crops.

Ssewanyana says research is ongoing about a more effective ‘Black Off’ Bio pesticide.

“The product will be 95% effective,” he says, adding that the process to register it is ongoing. He anticipates to have the product at the end of next year.

“The Ministry of Agriculture doesn’t just approve you without carrying out adequate research about the product. It took the Ministry two seasons (a year) investigating the effectiveness of the product and they found it effective and useful, but most farmers want us to give them free samples. If we give free samples to every farmer, shall we be doing business?” Ssewanyana wonders.

He urges farmers to at least buy the product in small quantities and test how good it is.

“If you trust imported products tested in a different environment, why don’t you trust our locally made products?” he questions.

He adds that at the beginning, they didn’t know where to go to register their product and lost a lot of money in the process.

Asked where farmers can find their product, Ssewanyana says they have opened a shop at Farmers’ Mall in Container Village.

He adds that some shops in Container Village and Mityana have the product, but it will soon spread to the entire country.

He says they have already acquired land in Kayunga district where the factory will be located. At the moment, everything about making the product is manual. Currently, they are producing 2,500 litres of the organic fertilizer per month. He says he hopes demand will go up since sensitization is ongoing.

“The product was formally registered two months ago, so sales are still low but we are optimistic it will pick up,” he says.

Asked how they ensure consistency of ingredients in the product from time to time yet operating manually, Ssewanyana says it’s all about maintaining the same mixing formula and ratios.

He hopes to automate the process of making the fertilizer in future. This, he says, requires a simple machinery worth about US$20,000.

“In three years to come, we want to be producing at least 10,000 litres of the fertilizer per quarter a year. We shall also be employing about 30 Ugandans,” he says, adding that ‘Black Off’ Bio pesticide and Bio Bloom, a product used during the flowering stage will also hit the market soon.

Ssewanyana adds that they’re working with the Uganda Bureau of Standards (UNBS) to come up with a standard for fermented products like his.

He urges farmers to use natural and organic fertilizers for health reasons. He says the company also plans to acquire about 100 acres to grow plants that he uses to make the fertilizer.

“This is where we need support from Government and lovers of environment-friendly fertilizers. We need machinery and land to help us expand in a sustainable way,” he says.

Business Focus reached out to former Finance Minister, Gerald Ssenduala to talk about Ssewanyana’s claims that he’s a consistent user of ‘Black Off’.

“Andrew (Ssewanyana) told me he had a good fertilizer made from a combination of plants. He said it was a good substitute for inorganic fertilizers,” Ssendaula recalls, adding that he asked for a sample of the product which he applied on maize towards the tail end of the rain season.

“I had condemned my maize; I thought it had gone but I was shocked by the results after applying ‘Black Off’ fertilizer,” Ssendaula said.

He adds: “It (maize) wasn’t feeling the sunshine at all. It turned from brownish to green. At the end of the day, I harvested something out of it. That’s when I fell in love with it.”

Ssendaula further reveals that given the limited rains in the first season of 2022, his maize was turning brownish and was staring at losses.

“When I applied Black Off, the crop yielded. I harvested 180 bags which I hadn’t expected to get. I’m convinced with certainty unless it’s lacking something (something can happen including climate change that can affect the effectiveness of the product), ‘Black Off’ is a convincing product. I wish many more farmers could try it out and give their opinion,” Ssendaula, who at the time of the interview was weeding his watermelon, says.

He says he has also applied it to coffee and it has worked for him.

“Farmers should use it on a specific field without using other fertilizers and find out how good it is,” he says. 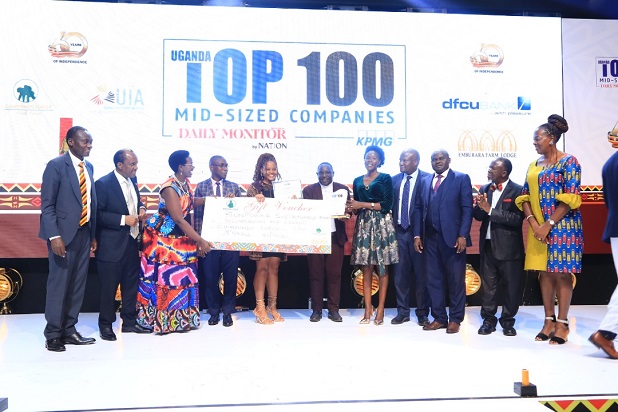 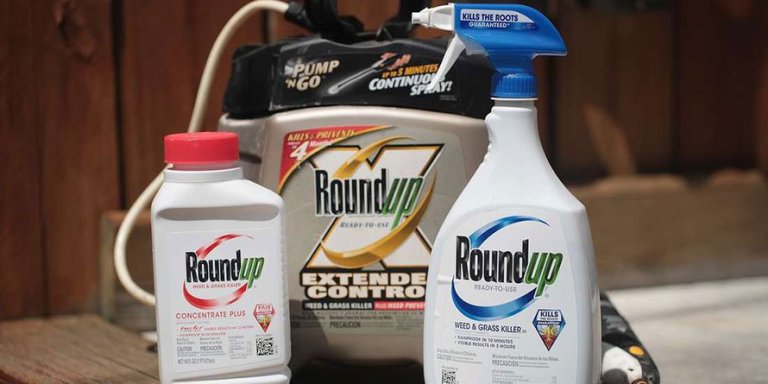 Experts Warn Over Continued Use Of Weed Killers Linked To Cancer