Uganda’s President Yoweri Museveni has revealed that his massive weight loss is as a result of a deliberate move to shed off extra fat.

Museveni’s revelation is contained in one of his letters to Ugandans he now fondly refers to as Bazzukulu (Grand children).

“One of the contributors thought that I looked tired. I am not tired at all. I have, however, deliberately lost weight by shedding off that fat that I had allowed to accumulate on my body frame because the doctors had not explained to us clearly the mistake of not fighting fat,” Museveni wrote.

The president also said he will soon embark on a rigorous campaign to educate Ugandans about the dangers of obesity.

BELOW IS HIS FULL LETTER

Dear Ugandans and, especially, the Bazzukulu.

Greetings. Crime seems to be going down on account of the as yet limited efforts we have deployed. The Police, at the Police Post or station, are supposed to have a standby force twenty four hours a day and seven days a week to react to any call of distress in their area of responsibility.

Secondly, the Police counter (desk) at every Police Station/ Post, must be manned by a Police officer twenty four hours a day and seven days a week so that when a member of Public, under attack by Criminals, rings, there is somebody to receive the call without any delay and, then, promptly inform either the OC station or even the in- charge of the reaction force to re-act immediately.

Thirdly, through the Local radios, all members of the Public in the locality should be informed about the telephone numbers of the nearby Police Post/ Station that they should ring in case of need.

All these steps are easy to audit because of the modern technology. All this is possible and easy to implement even with the old Police methods.

We have now added cameras. Kampala- Wakiso and Mukono are now covered- within eight months, the whole Country will be covered. The Police will be able to watch the activities – peaceful and unpeaceful- in the whole Country as far as the highways (major roads) and towns are concerned. Off the major roads, we shall use other methods.

We are, however, going to add other methods soon. Take, for example, the technology of the digital beacons in every vehicle and every piki piki. It will soon be rolled out. The criminals are an endangered species, I can assure you. Also endangered are the Police personnel or members of other security agencies who try to cover up these Criminals. It will be easy to audit and expose them. They will be arrested, charged, sentenced and dismissed from the security services and never to work for any Government department or Local Government forever. They are traitors. If you harm or fail to protect  Ugandans, starting with the Bazzukulu, you disqualify yourself from Public trust.

I sent out a message in my enshugyi (ancestral cattle- not gift from friends- empaano- not those you bought – engabirano). I sent it to the general channels that you call platforms. There is no harm in that because I saw the interesting comments from the Bazzukulu and other social-media users. I thank those who appreciated. I may not list their names here but I thank them. I am always in the Resistance Movement against everything that is anti- African.

In the 1950s and 1960s, the uninformed and shallow Colonial Veterinary staff and even other elements of the Colonial elite, started saying that the Indegenous cattle of Uganda (Sanga and zebu- enkoromoijo) were neither good for milk nor for beef. They were giving little milk and had poor beef. As a cattle owner, I knew that that was alot of nonsense. Yes, some of the Ankole cattle are low milk-yielders. They are called ebipampara. Hence, cattle names like Kapampara, kipampara.

However, others were high milkers. Understandably, the traditional cattle owners, sometimes, preferred ebipampara to the high milkers. Why? On account of the shortage of water and the need for the cattle to walk fast and go far- big distances daily to look for water.

High milkers, with a big udder, cannot easily walk fast or go far. That might have been the dilemma for the traditional farmers. Fortunately, in some of the areas of the cattle corridor, there is a lot of water. These are areas like Ntungamo, Igara, Sheema, Rukungiri, parts of Ibanda etc. Anyway, since I originate from Ntungamo, I was aware of the two lines within the Sanga breed: the high milkers and low milkers (ebimpampara). I could, therefore, not accept the colonial nonsense.

Along the way, scientific proof came in that the Sanga cattle meat is the best in the world because it had yellow fat as opposed to the white fat of most cattle in the World that has got cholesterol. The milk is also better than that of the exotic breeds because it has a higher butter content of 5.25% to 10% compared to that one of the exotics of 3.7% to 4.5%. It is therefore, good for the Ugandans generally and the Bazzukulu, in particular, to know these facts of our heritage.

Otherwise, the message of the cattle was directed at the cattle- breeders so as to discuss how to enhance the efforts.

The responders had requests of cattle to be given to them and others wanted to pay a visit to the farm etc. Organizationally, it is not wise to arrange cattle gifts or visits to the farm through social media. It will distort the use of social- media. The social- media should, in my opinion, remain a forum for the exchange of ideas.

Organizational matters should be handled in the normal way. There is, for instance, the myooga Sacco, saccos based on the respective specialized activities (obuheesi, okubaija, okunogoora, ICT such as BPOs, boda bodas, hair- salons, garments, food- processing etc etc).

Minister Kasolo can give more information on these. Through those, if you the members make them work well, we can implement the good ideas we shall have distilled through social- media interactions.

Some of the responders were negative. Retire, they shouted at me. That will be decided by our Party, the NRM and the People of Uganda.

Others wondered how me posing with my cattle helps the unemployed Bazzukulu. It surely, helps those who want to learn by example. I started looking after those cattle when I was 9 in 1954. When I accessed modern education, I did not use it to go to night clubs in Europe, I used to semi- modernize the animal husbandry of those cattle among several engagements.

All my children, except Muhoozi, after their education, did not go into Public Service jobs. They are in the Private Sector, starting with the cattle industry. In the last 120 years of Colonialism and thereafter, none of my parents- uncles etc – were in the Public Service.

There is life without working for the Public Service. My involvement with the political struggles is for historical missions of patriotism (loving Uganda), Pan- Africanism (loving Africa), social- economic transformation and democracy. Why?

It is for prosperity through the integration of the markets, for strategic security and fraternity in Africa. How many of you on the Social- media are contributing to that direction of thinking?

It is those concepts that will help us to solve the issue of jobs. Do you see how many Bazzukulu are in the factories for example the ones I recently commissioned (Balaji Group, Premier Distillers, Simi Mobile and Computer manufacturing plant, among others?

These Bazzukulu are working in these factories that are using the raw- materials of Uganda and that are benefitting from the market of Uganda, EAC and COMESA.

One of the contributors thought that I looked tired. I am not tired at all. I have, however, deliberately lost weight by shedding off that fat that I had allowed to accumulate on my body frame because the doctors had not explained to us clearly the mistake of not fighting fat.

In future, I will explain to you this awareness. I have moved from 106 kgs to now 76kgs. I will stabilize my weight at 76kgs because that is the one that matches with my height of 5.7 feet.

Before I talk about the anti- obesity campaign, however, in my next message I will talk about education in order to put in focus the recent strike at Makerere.

In fact, there was no road of any description in that area except the nearly impassable Kazo-Lyantonde and Rushere-Kinoni. Cattle do not need nor do they eat tarmac. They eat grass and drink water. The tarmac road you saw in the picture is not for the cattle but for the People of Butambala, Gomba, Ssembabule , Masaka etc.

Soon somebody will be able to come from Kabale and go to South Sudan without going through Masaka or Kampala. It is for the connectivity of your Country.

I, again, thank the huge number of the responders that appreciated the cattle of the heritage of Africa and my humble and modest contribution in breeding them. 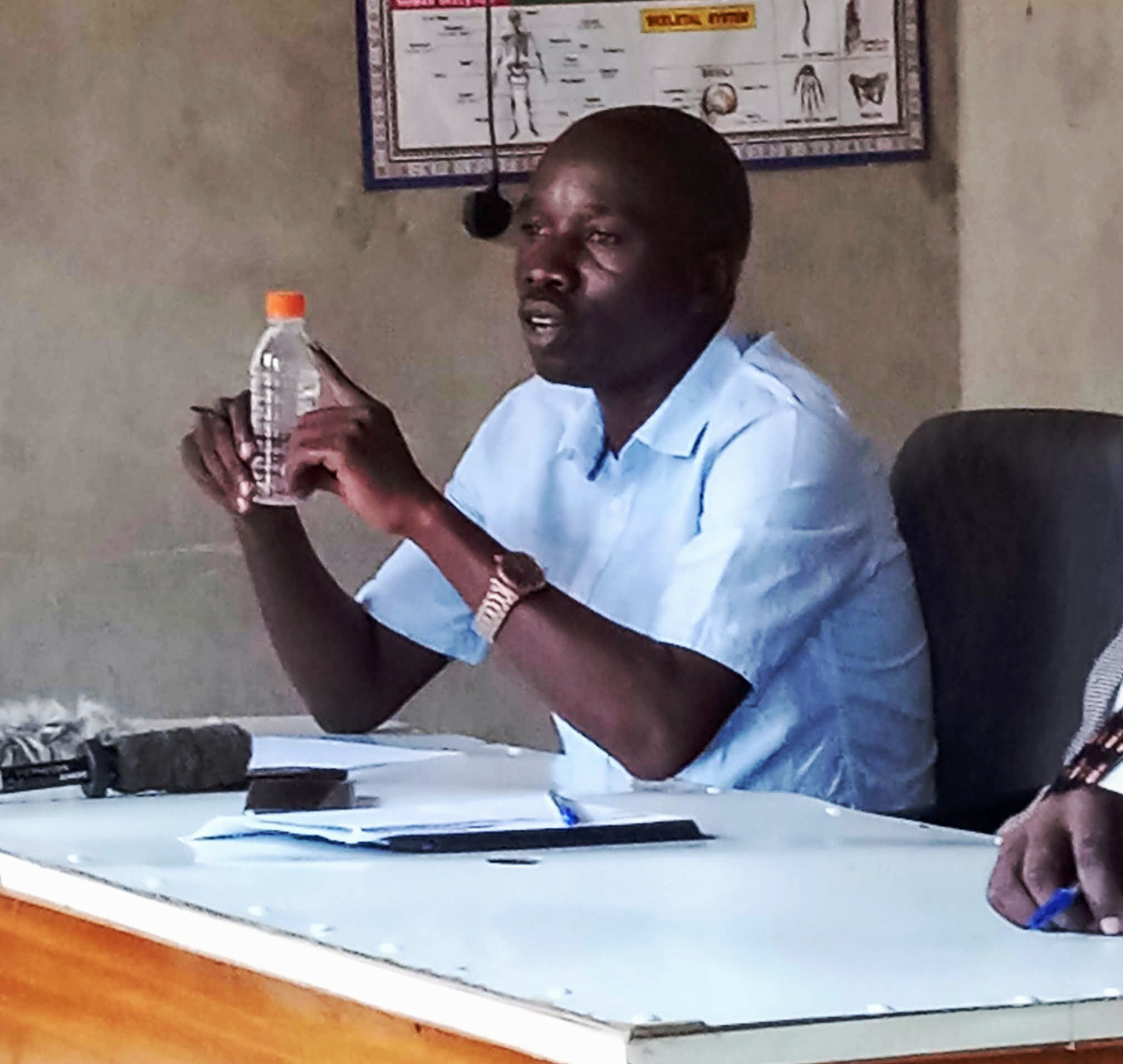