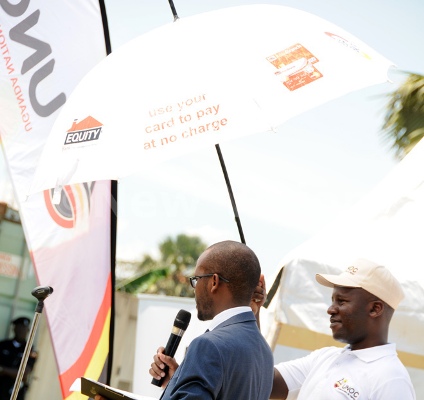 There was a battle of brands during the official handover of the Jinja Storage Terminal by the energy ministry to the Uganda National Oil Company (UNOC) last week.

The Storage Terminal managed by a private firm, One Petroleum operates under UNOC and received funding from Equity Bank Uganda to refurbish the facility.

So when Malcolm Noronha, the Managing Director of One Petroleum stood up to give his speech under the scorching sun, a quick thinking staffer rushed  to hold an umbrella over his head.

The only problem though was; the umbrella had the branding of a rival bank. Noronha noticed and made light of the awkward situation.

“Nothing is built alone. To build all of this, our staff have been very instrumental, without our customers, many of who are present here; we would not be where we are, and most of all, our banking partners; Equity Bank Uganda. I am sorry I am standing under (the umbrella of) Standard Chartered,” he said, prompting a fit of laughter from dignitaries at the occasion.

“Maybe next time, I will stand under (the umbrella of) Equity,” he added.

One of the Equity Bank representatives at the event rushed to their car and came back with a branded umbrella from their camp.

At that point, the black Standard Chartered umbrella was shelved—far away.

Moments later, Titus Kisambiro, the Jinja LC5 chairperson took to the podium and for a few moments, seeing as there was no umbrella above his head, he seized this moment to get into the umbrella ‘battle’.

“I do not know whether I have been deprived the privileges of having an umbrella over my head, be it Standard Chattered or Equity Bank,” he said, igniting fresh laughter among the small gathering.

“I will not mind though being without one, as these banks all have branches in my district,” he said.

And once again, an Equity Bank representative rushed to the Speaker’s rescue before anyone from the other bank did.

‘Kenya Could Be Ready For Bitcoin In Three Years’