The Ministry of Defence officials led by Under Secretary Edith Butoro were on Tuesday grilled by MPs on Parliamentary Accounts Committee (PAC) over misuse of Ministry’s funds as well as fraud in Uganda People’s Defence Force (UPDF).

The Ministry team had appeared before the Committee to answer the 30th June 2016 audit queries; where the Auditor General, John Muwanga exposed the accountability issues eating up the ministry.

The audit report revealed that the Ministry was struggling with outstanding arrears and dent of Shs718.43bn, with pension and gratuity arrears amounting to ShsShs536.46bn, Shs78.39bn for land compensation claims and Shs103.57bn for sundry creditors.

Buturo told the Committee that the Ministry carried out a verification exercise to establish the actual number of pensioners in 2010, but eight years down the road, the exercise is still ongoing.

She also acknowledged that many of the pensioners are yet to receive payment due to the limited resources envelop.

She also explained that the problem was worsened by the fact that the Ministry inherited the pensions payment problems from the Ministry of Public Service following the decentralisation of payment of pensions and gratuity.

The Ministry indicated that out of the Shs536bn, only Shs16bn has been paid, leaving a balance of Shs520bn.

This however angered MPs wondering how officers that have served Uganda diligently could be played around for their pensions.

Angelline Osegge, PAC Chairperson wondered why the Ministry has turned the issue of pension political.

“Every election time, you do this same thing of verifying pensioners. What does the information you collect help you to do. Why would you ask somebody to open an account when the money isn’t ready? How do you expect them to run those accounts?” Osegge asked.

However, Buturo refuted allegations that the Ministry has turned UPDF pensions subject political, saying the verification has to be undertaken to eliminate ghost pensioners.

She blamed the lengthy exercise on UPDF soldiers who tend to marry many wives.

“We don’t have efficiency problems. In the military, you find an officer with five women. Widows were coming up saying we belong to this man,” Butoro said.

The land compensation claims amounting to Shs78,396,271,647 also raised eyebrows after it Gerald Karuhanga,the  Ntungamo Municipality MP accused Retired Colonel, William Omaria for ‘voluntarily giving out’ of  his land (23square miles) to UPDF and later turned his mind, only to claim compensation worth Shs28bn and has so far been paid Shs7Bn.

Johnson Wepukhulu, Internal Auditor at Internal Ministry defended Omaria, saying he didn’t voluntarily give out his land, but UPDF rather strategically occupied his land, a statement Karuhanga rejected, urging UPDF to admit the land was forcefully grabbed.

MPs also pointed out the fact that Omaria is a ‘serial’ land grabber in Teso region and demanded for evidence showing he owned all that land.

The Ministry revealed that allegations of Omaria being a land grabber were brought forward and verification was done and turned out he owned the land, and actually has more land.

The report also highlighted that on the 11th July 2015 the Ministry paid cash amounting to Shs389.15m to an account in a local bank in the names of a supplier to procure 100,000 liters of fuel.

However, there is no justification why the Ministry paid cash instead of paying directly through EFT to the supplier. Besides, there was no evidence to confirm delivery of 100,000 liters of fuel.

Butoro said she was not provided with documentation to enable the auditors confirm that the fuel was delivered at the Ministry premises.

During the audit process, the Ministry officials said that the institution required fuel to undertake urgent operations, yet the other suppliers in the same category were not willing to provide this fuel on credit as the Ministry’s debt had surpassed the credit limit. 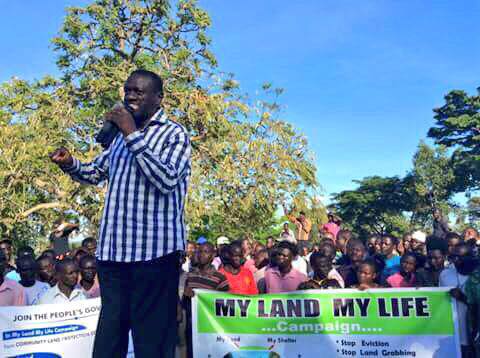