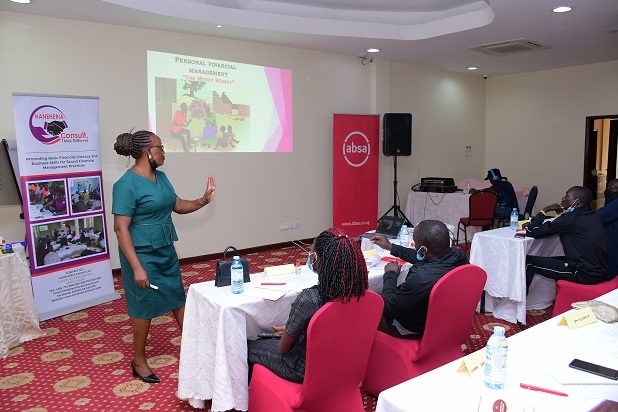 Absa Bank Uganda and Bank of Uganda have conducted training in financial literacy for Ugandan athletes and coaches to bolster their financial decision-making capabilities.

The training, which was conducted at the Mbale Resort Hotel, was facilitated by Mutesi Myria Lugwire, a Bank of Uganda Financial Literacy Master Trainer & Lead Consultant.

Eight athletes and two coaches benefited from the training, most notable of whom were Peruth Chemutai, who became the first Ugandan woman to win gold at the 2020 Tokyo Olympic Games by dominating the 3,000m steeplechase final.

The engagement also involved the attendees opening accounts with Absa Bank Uganda, with UGX 1 million already deposited by the bank as seed funds.

An additional training session will be conducted in Kapchorwa to enable the wider camp of athletes beyond Team Uganda to gain this crucial knowledge.

The initiative is in response to the fact that many Ugandan sportspeople tend to retire into poverty and squalor long after their time in the limelight and glory has passed.

Speaking during the training, Harriette Kasirye, Absa Uganda’s Head of Brand and Marketing said, “This programme is part of our commitment to being an enabler in the lives and careers of Uganda’s talented sportspeople. We recognise the immense value they bring to the nation and are making it a priority to see that they thrive both professionally and in their personal lives.”

Absa Bank Uganda was the official sponsor of the team that represented Uganda at the 2020 Tokyo Summer Olympics with a UGX 54.5m package that went towards medical care, health insurance and training kits for the team of 22 that comprised boxers, athletes, swimmers among other sports disciplines.