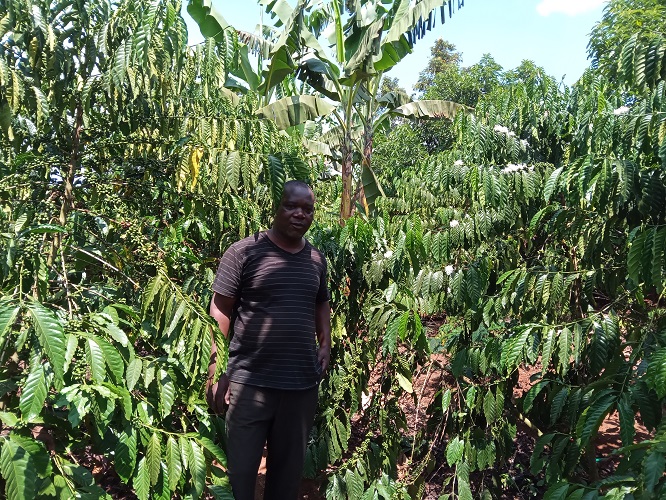 And when Business Focus team visited the commercial farm located in an urban setting on July05, Kasibante was irrigating his coffee plantation given the prevailing dry spell. His coffee, however, is integrated with matooke (bananas) and appears much healthier compared to other crops within the area.  He has also planted more 13 acres of coffee integrated with matooke in Gomba district in addition to investing in a piggery project.

His journey into farming

Kasibante says he didn’t fall into farming out of the blue as he has a farming background owed to the fact that his family in Butambala district has been involved in coffee growing for decades.

“I am a son of a farmer. My school fees mainly came from coffee,” Kasibante says, revealing that he left Butambala and came to Kampala after completing Primary Leaving Examinations (PLE) in 1989 to live with his uncle in Buziga, a suburb in Kampala City.  It is here that he was able to transition to secondary school, attending his Ordinary and Advanced level at Ggaba SS and St. Peter’s SS, Nsambya respectively as a day scholar.

Meanwhile, during the weekend and evenings, he was able to attend to his uncle’s 12 acre coffee farm.

“I learnt a lot about coffee during this period,” he narrates. But he personally joined commercial farming in 2015 starting with piggery mainly for breeding purposes and quickly expanded into coffee two years later.

“Piggery just like other animals comes with manure. By 2017, I had a lot of manure that I wanted to put to use and coffee integrated with matooke was the best thing to do,” he says, adding that he first planted three acres of coffee.

He says the local residents in area tried to discourage him in planting coffee and matooke, arguing that the two crops don’t grow well in the area.

But he had to prove them wrong by applying good agronomic practices.

He uses spacing of 10ft*10ft for coffee and 20ft*20ft for matooke. He has planted the high yielding clonal plantlets (KR varieties) that are resistant to coffee wilt disease.

“I have learnt one thing about farming; it’s about management of the crop and the soil. How do you manage the soil? Waiting for nature to do commercial farming isn’t tenable,” he says, adding that God has provided Ugandans with everything that they should use to their advantage.

Given the fact that his land is gently sloping, his plantation is covered with trenches to control soil erosion and conserve water. He has also planted nitrogen fixing plants in the plantation, but locals are destroying the beans-look alike plants, saying they are “evil.”

“It is true soils are depleted but we have the manure. The soil isn’t outlived, we can rejuvenate it and achieve higher yields,” he says, adding that he applies at least a basin of manure on each coffee tree annually. The matooke also get organic manure annually.

Asked whether he does soil testing and analysis, Kasibante said he’s yet to do so, but with better soil management it’s not necessary.

“Crops are like human beings. You need to (literally) speak to every crop every day to know how it’s doing,” he says, adding that most of his domestic waste is turned into manure and applied to crops.

For example, he burns polythene bags into ash which he later applies into the soil.

Kasibante, who has done extensive research on the enterprises he’s involved in, says he also uses human urine to improve yields.

“We keep it for two weeks. Thereafter, we mix it with water and apply it to the crops. It works as a fertilizer and pesticide. Urine is rich in nitrogen and it’s good for the root system,” he says.

He says Kampala Capital City Authority (KCAA) has a budget of about Shs40bn annually for waste management from mainly markets yet this waste can be turned into organic manure.

Kasibante also uses coffee husks from his farm as manure since he only sells green beans/kase. In Gomba, he has access to cheap manure since most farmers are into animal husbandry (majority are cattle keepers and others are into goats rearing).

Kasibante says he doesn’t depend on nature to do farming. He has therefore dug a shallow well of 50ft deep that gives him water for irrigation throughout the year.

He uses a petrol engine pump to pump water to the 10,000-litre tank. The farm is connected with water pipes and hydrants (taps) where he connects sprinklers to irrigate the coffee using gravitational force.

“The nature of my land is sloppy, so we spend less money on irrigation because we irrigate by gravity,” he says, adding that his irrigation system excluding digging of the well cost him about Shs8m. The six productive acres are covered with water pipes. One acre whose coffee is still young is yet to be covered.

“Coffee has no season once you stop depending on nature. If you irrigate coffee, it will flower throughout the year,” he says.

Kasibante’s coffee trees have different ages since they were not planted in the same season/year. This means they can’t give him the same yields.  He says he expects about 60 sacks of dry cherries/kiboko this season. He has so far harvested over 20 bags. He anticipates production to increase as trees grow bigger.

“I have ready market for my coffee. Yesterday (July 4) someone called me offering Shs6, 500 per kilogram of green beans,” he says.  He says for matooke, the demand is overwhelming since he’s in a semi-urban environment.

“When there are events such as introductions (kwanjula) and weddings within the area, I am the first contact person. Even during lockdown, I had huge market for matooke because people were confined within their homes,” he says.

His bunches of matooke are big because he feeds them well and therefore the average price for each is Shs20, 000.

Kasibante has two well-built pig sites that are 18ft high. He says this was done to reduce on the effect of heat from iron sheets on pigs. He also uses the Indigenous Micro Organisms (IMO) system and therefore his pig sites are odourless. He is mainly into breeding and selling piglets.

He previously had a stock of 60 sows but was attacked by the African swine fever a few years ago, forcing him into a break.

He is now restocking and currently has about 20 pigs that are soon delivering.

“From 20 sows, I expect a minimum of 10 piglets from each. This means after four months, I am in position to supply 200 one month old piglets,” he says, adding that when he had 60 sows, he would have over 600 piglets. The former MP says he sells a month old piglet at Shs150, 000, earning a gross income of Shs30m from 200 piglets.

To avoid contaminated and adulterated feeds, Kasibante bought a small maize milling machine at Shs3.5m that helps him process the maize. This means he makes his own feeds that are up to his preferred standards.

He has four permanent employees on the 7-acre farm but employs more during coffee harvesting time. In Gomba, he employees six workers.

Like other farmers, Kasibante isn’t immune to challenges. He says the market is flooded with fake pesticides and drugs, a thing that is frustrating farmers.

“Government is lacking total control on suppliers of agricultural inputs. Ministry of Agriculture and Uganda National Bureau of Statistics are doing a disservice to this country. They aren’t paying much attention to agriculture as they should,” he says, adding that the coffee seedlings market is also not well controlled.

“You rarely see Uganda Coffee Development Authority officials on the ground,” he says.

Thieves, too, is a huge challenge. “Coffee is now gold; we have a problem of thieves,” he says, adding that during harvest time, he intensifies night inspections and monitoring.

He adds that getting hardworking and reliable casual labourers is also challenging.

“Our people here don’t want to work; they want quick money. I sometimes get workers from Kasese,” he says, adding that it wouldn’t be a surprise to find Congolese and Burundians working at his farm.

Kasibante says he participates actively in his farm activities.

“This is my job. I have a time table I follow every day; what to do and where to go. If I am not here, I am at my Gomba farm,” he says, adding that he recently hired a manager who’s an expert in farming.

He says he ensures that he is around during matooke and coffee harvesting period not only to ensure quality, but also avoid workers illegally selling off the produce.

Not About to quit politics

Kasibante says a man is a political animal and therefore he can’t quit elective politics at this particular time. He says politics is about organizing society but you can’t organise society if you’re not organized.

“If I can organize society, why Can’t I organize myself? You have to organize both the society and yourself,” he said in reference to politicians who become financially handicapped after losing their political positions.

He says he is changing the mindset of many people about farming.

“I get many people visiting me to learn how things should be done. I get MPs, LCV Chairpersons, Mayors, Councilors and ordinary Ugandans,” he says, adding that he’s inspiring many people into commercial farming.

Kasibante says one doesn’t need to seek jobs in Arab countries yet Uganda has idle land.

“If you have two acres of land in Uganda, you don’t need to look for employment in the Arab World. Egypt is doing more commercial farming  than us using water from Nile River but it’s expensive for them. We have a better comparative advantage to do commercial farming but we are not taking it serious,” he says, adding that almost every village in Buganda is separated by a river but water isn’t utilized.

“How can we fail to do commercial farming? How do those farmers in the Arab world look at us seeking employment from them?” he wonders.

Kasibante says the agriculture ministry in liaison with ministry of trade should take over and control all agriculture related exhibitions and shows across the country.

“This is because unsuspecting Ugandans are getting exposed to people with selfish interests. These shows and exhibitions must be regulated; people are getting exposed to wrong ventures,” he says, noting that at one time, Ugandans were told to rear quails but they ended up in tears. He adds that farmers should go slow about the Hass avocado hype.

Kasibante also says UCDA should reassert itself in as far as coffee farming is concerned.

His Take on Parish Development Model

Kasibante says the much hyped PDM was uncalled for and won’t transform Ugandans as money will be wasted.

“A model should be experimented first. In my opinion, it is a model by name and that’s dangerous; it is a political development model to promote the regime,” he says, adding that peasant farmers have done their part. 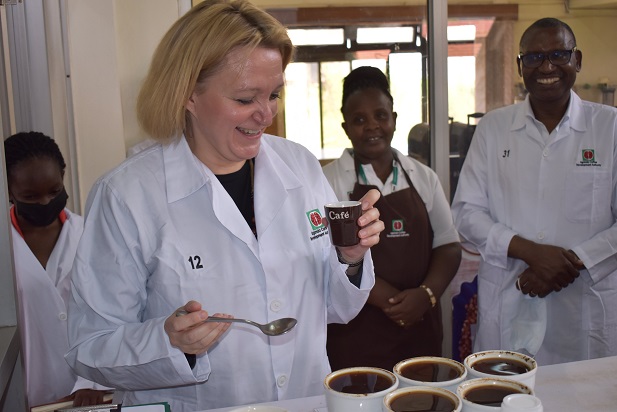 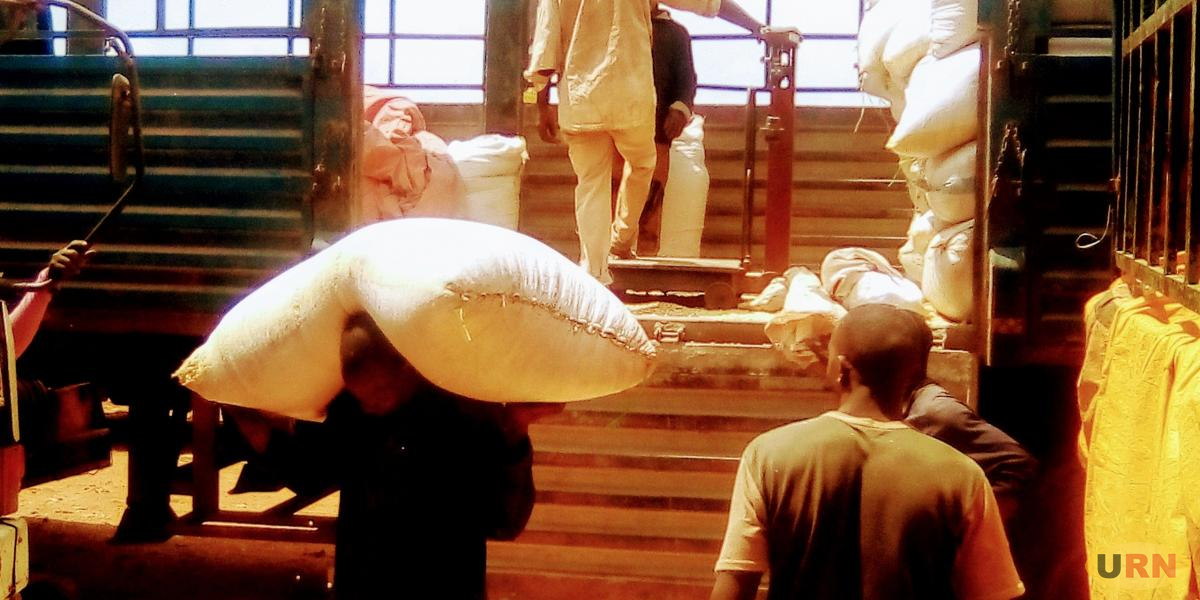 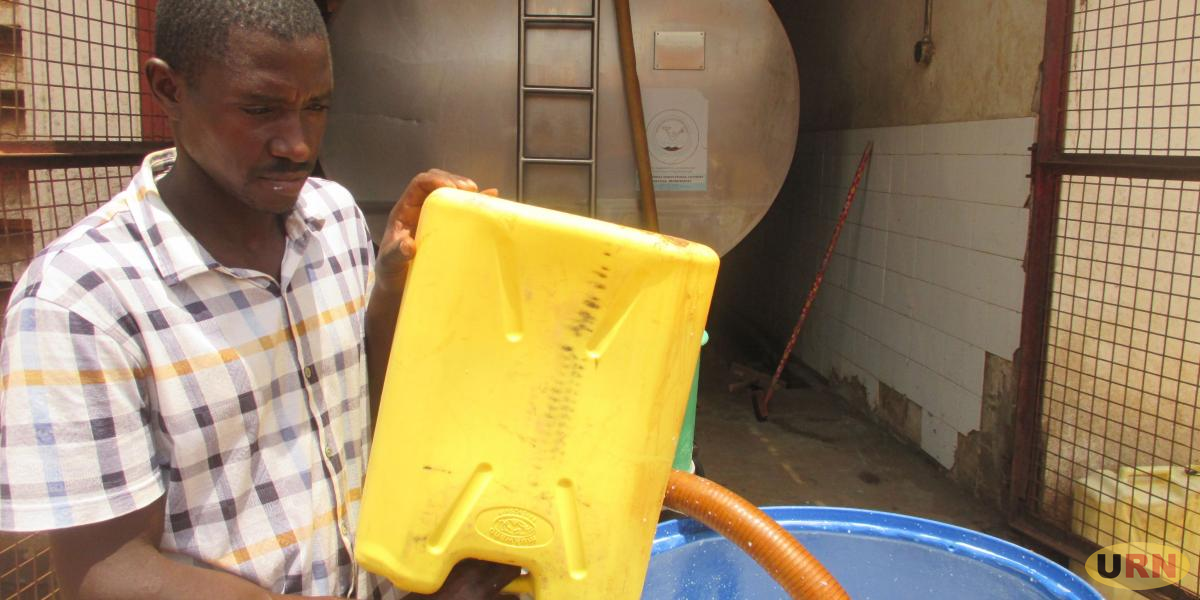